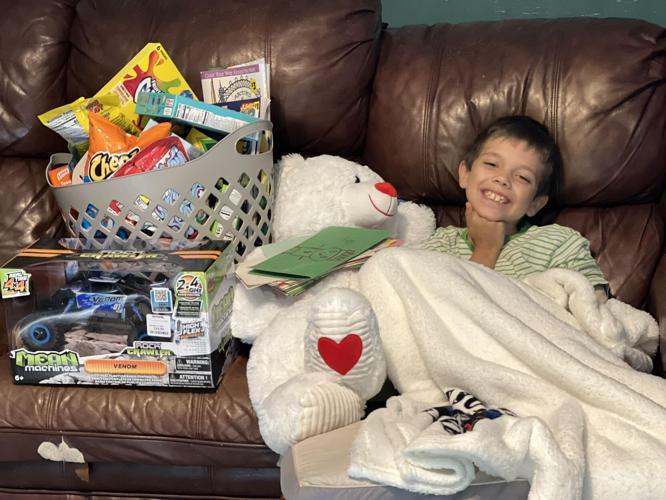 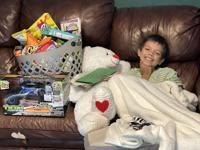 Gavin Peoples, 9, received gifts and cards from his classmates after he got home from the hospital. 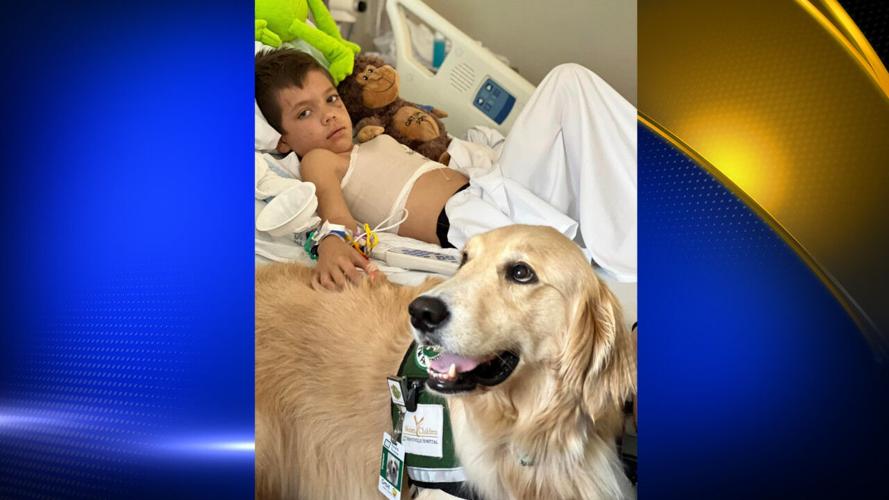 Gavin Peoples, 9, pets a therapy dog at Huntsville Hospital days after being attacked by a pack of dogs in Lawrence County.

Gavin Peoples, 9, received gifts and cards from his classmates after he got home from the hospital.

Gavin Peoples, 9, pets a therapy dog at Huntsville Hospital days after being attacked by a pack of dogs in Lawrence County.

A Lawrence County boy who was attacked by five dogs while riding his bicycle is now recovering at home, according to family.

His mother, Stephanie Overton, shared the update on social media Thursday. Nine-year-old Gavin Peoples had been at Huntsville Hospital since Sept. 10, when he was attacked while riding in his neighborhood.

Gavin told his mother that one of the dogs grabbed him by the leg and pulled him from the bike. When he swatted at the dog, she said, the other four began to attack.

Neighbors rescued Gavin and provided first aid until emergency medical personnel could arrive. Gavin had bites on his neck and leg, leaving with him with 30 wounds in need of stitches.

"He is so happy to be home," she said in a Facebook post. "His brothers and sisters are loving getting to help him walk around. They argue over who gets to take care of him."

Gavin still has trouble walking and moving his left arm, but Overton said he is getting better with each day.

"We still have a ways to go but he is so happy right now," she said in another update. "We will be by his side until we get him back to full strength and back to school!"

His classmates are also eager to have him back. Overton shared a photo Friday of the cards and gifts that Gavin has received from his school, as well as the big grin they brought to his face.

A GoFundMe has also been set up to help the family with expenses as Gavin recovers. You can find it here.

The five dogs who attacked Gavin were owned by 36-year-old Tanya Lynn Emery of Moulton and her boyfriend.

Emery had been caring for the dogs while her boyfriend was in the Lawrence County Jail. After Gavin was attacked, Emery was arrested and charged with violating Emily's Law.

That law aims to hold owners accountable when their dog attacks and causes serious physical injury to someone without justification, especially if the owner has been warned the dog poses a threat to others.

Emery was booked into the Lawrence County Jail with bond set at $10,000. The dogs that attacked Gavin were euthanized and submitted for rabies testing, which came back negative.

Supply chain issues took its toll on flower shops, too. Here's how one business planned for delays

Everything you need to know to fight sunburns, premature aging and skin cancer this summer