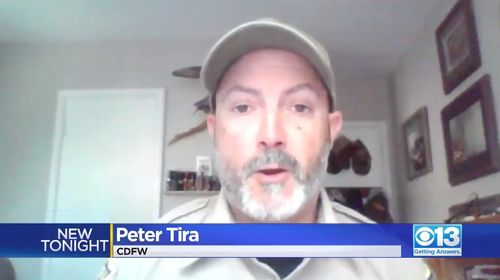 SACRAMENTO (KOVR) -- A strange underwater creature known as the vampire fish is making a comeback to the American River.

Just this week, local divers spotted two of them.

The vampire fish, otherwise known as pacific lamprey, is long with leather-like skin, and it has teeth.

“It looks like some sea creature from the deep,” said Karl Bly.

Bly has explored the American River for 40 years, most recently with a GoPro, taking videos along the way.

But Bly says the vampire fish tops his list of strange sightings.

“They would be high up there as a rare fish,” he said.

Despite the mystery, the vampire fish calls California waterways home.

“It is native to California and to the American River,” said Peter Tira, with the California Department of Fish and Wildlife.

Tira explains that Pacific lampreys are born in freshwater, migrate to the ocean and then come back here to have their young – up to 100,000 of them at once.

“In the ocean, they will attach themselves to a dolphin or shark or whale and suck on that larger host fish to feed off the nutrients,” Tira said.

Earning the nickname vampire fish, though, they won’t hurt humans.

“They are not harmful at all to people,” Tira said.

And even though they don’t look pretty, river visitors say they make the area unique.

“It’s great that we have so many fish and wildlife and it hasn’t been ruined and I’d prefer to keep it that way,” said Micah Remy, who lives in Sacramento.

Fish and Wildlife says the Pacific lamprey did disappear for a bit out of the river and are now making a comeback, but there’s nothing to indicate why.

The lamprey is a mysterious fish and there is really not enough data to understand their patterns.

Road incidents cause traffic on I-565 near U.S. Space and Rocket Center

Huntsville family to be on America’s Funniest Home Videos. See if they win 6 p.m. Sunday on WAAY 31!