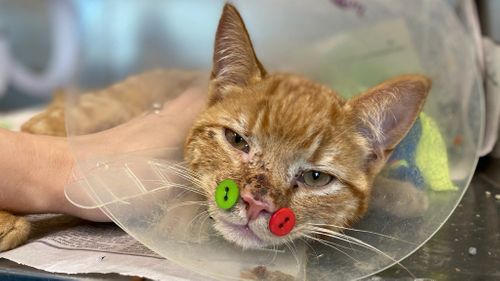 BOSTON, MA (WBZ) -- A 7-month-old cat named Juicebox is considered lucky to be alive following a dog attack last month. Following what is described as a “novel but highly effective” procedure, Juicebox now has four plastic buttons attached to his face to help his injuries heal.

The cat was rushed to MSPCA’s Angell Animal Medical Center on January 20 after the attack. The orange cat suffered head trauma and was diagnosed with multiple jaw fractures, cuts, and damage to the palate in the roof of his mouth.

Two plastic buttons were attached to Juicebox’s cheeks and two below his chin following the surgery. They are put in place to hold sutures and stabilize his jaw. The buttons will remain in place for 4-to-6 weeks, then be removed completely.

Juicebox’s owners made what the shelter called a difficult decision to surrender the cat so he can be placed in a new home without dogs.

“He has obviously been through and survived a serious trauma, but he has adapted quickly to the sutures that limit the use of his jaw and, through it all, he’s remained an outgoing, playful and really friendly cat,” Victoria Odynsky, manager at the MSPCA’s Boston adoption center, said. “We are relieved that we are able to provide urgent medical care for him, and we’re glad to see him recovering so well.”

Medical bills will exceed $2,000 for Juicebox’s treatment. Anyone who wants to donate to offset the costs can donate through the MSPCA website.

The organization said there is currently “soaring interest” for pet adoption in Massachusetts.

Tennessee man killed while changing a tire in Decatur

Huntsville program offers up to $7,500 toward down payment, closing costs for homebuyers

6 hurt, including 4 children, when SUV goes over I-565, Washington Street overpass

Another hot humid day in store for North Alabama, dangerous heat expected by the end of the week

Johnson and Johnson recalls some Neutrogena and Aveeno sunscreens