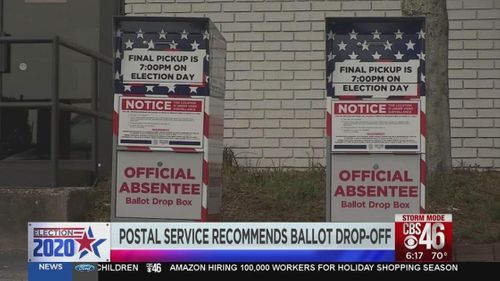 ATLANTA, GA (WGCL) -- With just six days until Election Day, the U.S. Postal Service says it can no longer guarantee that its mail carriers can deliver absentee ballots before 7 p.m. Tuesday.

The postal service recommends voters locate an official absentee voter drop box in their county and drop off their ballots themselves.

“You have control of it. You can take it to the absentee ballot drop box," he said. "That way, you know your vote will count.”

Raffensperger said roughly 500,000 Georgians who requested absentee ballots had not turned them in as of Tuesday. To be counted, the ballots must be received by county elections officials by 7 p.m. Nov. 3.

As of Oct. 27, more than three million Georgia voters had already cast their ballots -- one million of them using absentee ballots. Raffensperger estimates that by Election Day, roughly six million Georgians will have voted. In 2016, 4.1 million voters cast ballots.

Huntsville ranked #4 most moved to city in 2020

Expert explains rise in gas prices nationally and in Alabama

Brooks High School teacher out on $50,000 bond after indictment on sex with student charges