Fireworks at home: Risks and safer alternatives, as sales skyrocket 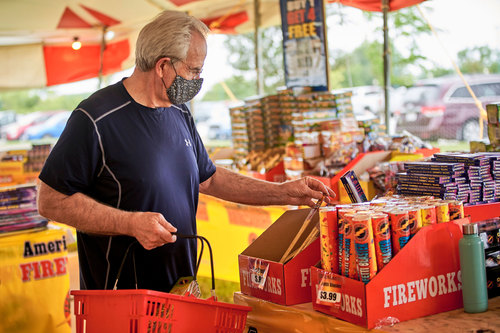 Extravagant firework displays have long been a staple of the Fourth of July holiday, but this year many of the larger displays in cities across America are n...

Extravagant firework displays have long been a staple of the Fourth of July holiday, but this year many of the larger displays in cities across America are now canceled due to the pandemic. This has many Americans turning toward consumer fireworks to get their patriotic fix. But they can be dangerous in the wrong hands.

Last year, more than 7,000 people reported injuries related to fireworks around the Fourth of July period, according to the United States Consumer Product Safety Commission. And this year, sales are way up.

"They're not toys and so oftentimes we see hands and fingers blown off because people aren't respecting the device they're working with," said Dana Baiocco, commissioner of the US CPSC.

According to the CPSC, 57% of firework-related injuries were burns. People were more likely to hurt their hands and fingers than any other part of their body, which could be caused by holding the firework too long after it's ignited or using hands as a shield if someone points a firework at someone else, according to Baiocco.

Sparklers should also be used with the same amount of care as other fireworks, Baiocco said. She said the tip heats to about 2,000 degrees Fahrenheit and can burn someone if not put in water after use. Children should not be using sparklers, said Julie Heckman, the executive director of the American Pyrotechnics Association.

"We don't give our children matches to play with nor do we give them candles, so you really shouldn't give children fireworks," Heckman said. "Let the adults handle the fireworks and let the children be the spectator."

It's also important to purchase your fireworks from a licensed vendor, according to Baiocco. She said that buying from licensed vendors means that the fireworks meet certain safety requirements.

"If you have the appropriate license in place, that will tell the purchaser that those fireworks presumably have been tested by a third party to make sure that they all comply with the federal and state safety standards and requirements," Baiocco said.

A common way to check if they're consumer fireworks is to see if they're in brightly colored packaging, Heckman said. If they're in a brown paper bag, it could indicate that they're illegal or professional grade fireworks, according to Heckman.

Consumer firework sales have doubled or tripled in the past month for some retailers compared to last year's numbers, according to Heckman. She said it's mostly likely due to the pandemic.

"We still can't go to the movie theater or any concerts or festivals," Heckman said. "Fireworks are affordable family fun."

John Sorgi, owner of American Fireworks, said his company has seen sales of consumer fireworks increase by 30% compared to this time last year. The fireworks company is headquartered in Ohio and has both brick-and-mortar stores and an online shopping website.

Sorgi said that due to mass cancellations of larger firework shows, many families are turning to consumer fireworks. He said he has seen such a spike in sales his company has had to stop selling products to wholesalers so they can preserve what they have for their own stores.

"The way fireworks works is it's not like you can just run out to a supplier to buy more because they're all coming from China," Sorgi said.

His company places orders in July the year before and receives the product in November or December. This year, he wasn't sure if he was going to receive his fireworks because China went into lockdown mode due to the coronavirus, according to Sorgi. Luckily, he said, they were eventually able to receive their orders.

Ohio is one of the states where it's legal to purchase fireworks but not set them off, Sorgi said. Years ago, he said customers had to fill out a form acknowledging this law when purchasing from his store, but now it's just printed on all the receipts.

"It's one of those weird industries where there's just no federal regulations nationwide, it's just really state-by-state," Sorgi said.

Because the laws differ so drastically, it is important to research what the local laws say, Heckman said. The APA has a state-by-state guide on its website that summarizes the laws for each state, but it could also differ by county or city.

"They need to contact their local authority having jurisdiction, which is usually the local fire departments," Heckman said.

There are plenty of ways to celebrate Independence Day other than setting off a bunch of fireworks, even with social distancing. Here are a few of our favorites.

Watch "Hamilton": Disney is releasing "Hamilton" on its streaming service Disney+ on July 3, which is just in time for your Fourth of July festivities. Even five years after its Broadway debut, it's still the hottest ticket around. Plus, with Broadway on a hiatus due to the pandemic, this is currently the only way to see the historical musical. According to Hamilton playwright Lin-Manuel Miranda, some of the swear words were removed to allow the movie a PG-13 rating so kids could see it.

Bike ride: Deck out your bike in patriotic gear and take a bike ride around your block. This is a great way to use party decorations that would have otherwise gone unused this year. Other members of your household can join in on the fun and turn the bike ride into a mini parade around the neighborhood.

Confetti poppers: Skip the sparklers and instead make DIY confetti poppers. They'll add just the right amount of sparkle to your festivities and are safe for children to make and use. Confetti poppers can also be purchased at the store if you don't want to make them yourself.

S'mores buffet line: Nothin' says summer quite like gathering around the campfire and making gooey s'mores. After your grill out, set up an assembly-like buffet line of ingredients and take turns roasting marshmallows around the fire. You can stick to the basics or switch it up with different flavored chocolates or marshmallows.

Historical landmarks' virtual tours: While you may not be able to visit historical landmarks in person this summer, their virtual doors are wide open. Sites such as Mount Vernon, the home of George Washington and the Statue of Liberty offer virtual tours of their landmarks online. It's an interactive way to learn about American history without having to change out of your sweats.

Madison City Schools works on plan for the fall