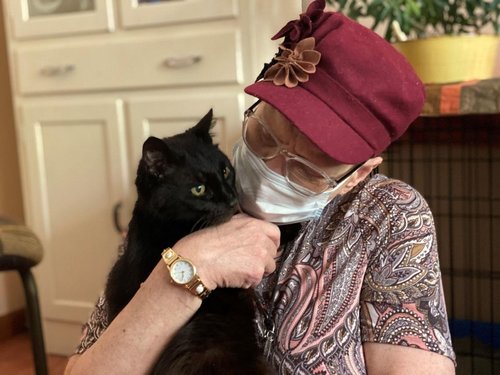 BETTENDORF, IA (Quad City-Times ) -- After 10 years, Herschel — a little skinny but otherwise healthy — has come home, possibly after using up one or two of his nine lives.

Karla Ehrler, of Bettendorf, didn’t know what to think when a Quad-City veterinarian called her to ask whether she had a black cat.

“I told them no,” she said. “I said I didn’t have a black cat.” She does have other animals, including birds, dogs and a rabbit.

And then it struck her.

It was 17 years ago that a friend of Ehrler’s found three abandoned or orphaned kittens in Davenport. Ehrler took a black kitten with a white star on its chest.

She had the cat neutered. Because Ehrler enjoys camping, she also had his front claws removed so he wouldn’t claw at the canvas.

Ehrler named the cat Herschel after one of Ehrler’s favorite square-dance callers in the Chicago area.

Seven years after she adopted Herschel, she let him out one night and he didn’t come home.

“I was heartbroken,” says Ehrler, who looked all over for her little companion but never found him.

“A girl had found him, and taken him to the vet,” Ehrler said. A microchip revealed Ehrler as the owner (“I chip all my animals,” Ehrler said.)

Ehrler asked whether the cat appeared to be very old, and when the answer was yes, Herschel’s rescuer brought the cat to Ehrler’s home.

“I was dumbfounded,” Ehrler said.

“I didn’t even get her name,” said Ehler, who gave the girl $25 for finding the decade-lost cat. At first the girl didn’t want to take the reward, but Ehrler asked, “How much money would you pay to get a child back?”

Herschel had no fleas or mites. Herschel’s rescuer told Ehrler she picked three ticks off the elderly cat.

“He’s very mellow,” Ehrler said. “It’s like he has lived here his whole life.” Herschel sleeps in a huge cage with a comfy bed right next to Ehrler’s bed.

During Herschel's 10-year absence, "I can’t imagine where he was sleeping,” she said. “How did he survive? I have no idea.”

She thinks someone must have taken care of him at some point. Had he not been neutered, she added, he could have fathered hundreds of kittens.

Herschel looked at Ehrler, perhaps puzzled about why she would interrupt his afternoon nap for a photo. They exchanged an affectionate glance, and Ehrler summed it up:

“My Herschel is home."

New details of what was found with remains of Brian Laundrie