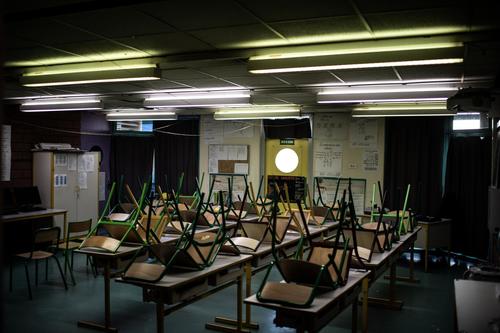 The coronavirus has set global school enrollment back f...

The coronavirus has set global school enrollment back four decades, as closures and recessions in many countries have hit education, according to a new report by a United Nations agency.

Tracking global changes since 2019, researchers at the UN Development Programme have found that education, health and income measures sharply dropped after the coronavirus emerged and shutdown economic activity worldwide.

"All three dimensions are being hit very very hard, that's what is unique and unprecedented," Pedro Conceição, director of the UN Human Development office told CNN.

Their report is based on simulations taken from calculations by international agencies, including the International Monetary Fund, and warns of a "steep decline in human development worldwide in 2020 led by a massive setback in effective education" because of school closures and deep recessions in most countries.

As of mid-May, global daily deaths due to Covid-19 are greater than common causes such as suicide, malaria, road traffic accidents and HIV/AIDS, the report finds. It also says that for countries at the peak of the virus, Covid-19 is the main cause of death -- surpassing cancer and coronary disease.

Indirect damages, like the shutdown of schools, also concern the UN agency, which sees education as a human right and a crucial part of any country's development.

Since the pandemic began, Conceição said the rate of primary school enrollment has now dropped back to levels not seen since the 1980s. Nine out of ten schools worldwide are closed, according to the report, and many children can't learn from remote locations.

With health systems overwhelmed and falling immunization and vaccine rates, the virus could also lead to 6,000 preventable deaths per day in the next six months among low- and middle-income children globally, according to the report. Such preventable deaths may be an example of the virus exacerbating what the report calls "unresolved tensions between people and technology, people and the planet, and between haves and have-nots."

Conceição hopes the new numbers will "trigger a debate" on policy during the pandemic and after the virus subsides. But coordination between national governments and international agencies has so far been tainted by geopolitical rivalries and agendas. More than two months after the virus first erupted, the UN Security Council still can't agree on a resolution calling for a world ceasefire, and China and the US continue to clash over the World Health Organization.