Norma McCorvey, plaintiff in Roe. v. Wade, said she was paid to speak against abortion 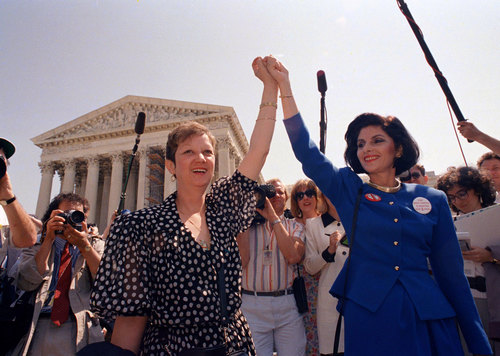 Norma McCorvey, the anonymous plaintiff in the 1973 US Supreme Court case...

Norma McCorvey, the anonymous plaintiff in the 1973 US Supreme Court case Roe v. Wade, says in a new documentary that she became an anti-abortion activist because she was being paid.

The documentary "AKA Jane Roe" is set to premiere Friday on FX and gives viewers an inside look into McCorvey's journey from abortion rights plaintiff and advocate to anti-abortion campaigner.

Before her death in 2017, McCorvey told the film's director that she hadn't changed her mind about abortion, but told the director she said what she was paid to say.

"I was the big fish," McCorvey says in the documentary. "I think it was a mutual thing. ... I took their money and they'd put me out in front of the cameras and tell me what to say."

McCorvey became well-known as Jane Roe in the case that legalized abortion in the United States. She was pregnant when the case was filed and gave birth to a girl who was given up for adoption.

In the aftermath of the case, McCorvey worked in women's clinics but switched sides in 1995. She became a Christian, joined anti-abortion activists and started an outreach group called Roe No More that was dissolved in 2008.

In the documentary, the Rev. Rob Schenck, an evangelical minister who worked closely with McCorvey, said she was "coached in what to say" and was paid because there was concern that she "would go back to the other side."

"What we did with Norma was highly unethical. The jig is up," Schenck said in the documentary.

Schenck told CNN on Tuesday that he knows McCorvey was telling the truth about being paid because he "cut checks and signed them and made them out to Norma" and was aware of other groups that did the same.

McCorvey had been working at a Dallas women's clinic in 1995 when the anti-abortion group Operation Rescue moved its offices next door. Later, she befriended the staff and eventually joined the group.

Operation Save America, an anti-abortion group formerly known as Operation Rescue, has denied McCorvey was paid by that group.

"To my knowledge, she was not paid by our ministry. We tried to teach her it was better to serve than to be served," Rusty Thomas, national director for Operation Save America, said in a statement to CNN.

After McCorvey was baptized, "the Catholic church began to offer her speaking engagements that would not only give her public recognition in the pro-live movement, but speaking fees as well," Thomas said in a statement posted Wednesday on the group's website. "How much, again, I do not know."

Troy Newman, the president of the new Operation Rescue, denied that McCorvey was on the group's payroll but said she would sometimes receive honorariums of $500-$1,000 for speaking engagements.

"She was never an employee. I never asked her to do anything," Newman told CNN. "She wasn't our spokesperson. If there was a gift that went her way it was to help her with a need she had at that moment."

His organization was initially a branch of the former Operation Rescue and took on the name in the late 1990s.

Newman said he doesn't believe that McCorvey was paid to say anything.

"Nobody told Norma what to do," he said. "She was fiercely independent, and nobody's gonna tell her what to do or say."

The film's director, Nick Sweeney, said he was surprised by McCorvey's comments, but realized why she had shared them in her final year of life.

"Throughout her life, many different people wanted Norma to fit their preconceptions of Jane Roe," Sweeney told CNN. "She just wanted to be unapologetically Norma."

Schenck says he feels differently about the issue now. "These days, I think I will never be pregnant, I will never face that crisis in my life," he said. "So I don't really think I'm the best person to advise on it. I think that's the woman in crisis."

McCorvey died three years ago in Katy, Texas, at the age of 69.

"If a young woman wants to have an abortion, fine, you know, it's no skin off my a**," McCorvey says in the documentary. "That's why they call it choice. It's your choice."