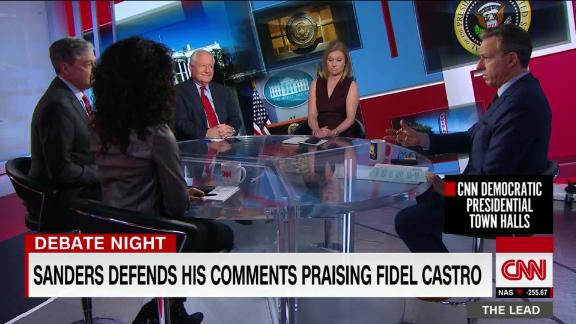 Welcome to CNN's fact check coverage of the tenth Democratic presidential debate from Charleston, South Carolina, ahead of the state's primary on Saturday.

Vermont Sen. Bernie Sanders, the current front-runner after winning the Nevada caucus, will likely face attacks over his recent defense of the former Cuban dictator Fidel Castro. Sanders will also have to defend his recently released plan to pay for his legislative proposals such as 'Medicare for All,' free college, and various debt forgiveness ideas.

The debate will also be a chance for former New York Mayor Mike Bloomberg to bounce back from a rough performance in last week's debate, when he faced criticism over sexist comments he allegedly made in the early 1990s, as well as his use of non-disclosure agreements.

The debate is also a crucial opportunity for former Vice President Joe Biden, whose campaign needs a strong performance in South Carolina to stay viable.

This article will be updated throughout the night.

In an early exchange during Tuesday night's Democratic presidential debate, Bloomberg told Sanders that '(Russian President) Vladimir Putin thinks that Donald Trump should be President of the United States, and that's why Russia is helping you get elected.'

Sanders tried to fend off the attacks by condemning Russian meddling in the 2016 election and warning Putin that he wouldn't be a Russia-friendly president.

Facts First: Bloomberg accurately pointed to a US intelligence community belief that Russia is trying to help Sanders' campaign. Russia also backed Sanders in the 2016 primary, but Sanders has publicly denounced Russian interference in US politics.

Sanders acknowledged last week that US intelligence officials had informed his team that Russia was trying to help his campaign. It's not clear what Russians are doing to help Sanders, and there haven't yet been any sweeping hack-and-leak operations like the cyberattacks that hit the Democratic National Committee during the 2016 presidential campaign.

US intelligence leaders have said that Russia routinely tries to sow discord among the American public and amplify voices on the extremes of the political spectrum, to inflame divisions and undermine the stability of American democracy. Their past support for Sanders and Trump, who have both antagonized their own parties, fits into this big-picture strategy.

Separately, a senior US intelligence official, Shelby Pierson, told lawmakers earlier this month in a classified briefing that Russia was taking steps to help Trump win reelection. CNN later reported that Pierson appears to have overstated the formal assessments from the US intelligence community, and senior White House officials rebutted her comments.

The Russian government, at Putin's direction, undertook an extensive campaign in 2016 to boost Sanders' primary campaign against former Secretary of State Hillary Clinton, and to help Trump defeat Clinton in the general election. The Kremlin operation included well-funded troll farms, propaganda on social media, cyberattacks and leaks of private emails.

Bloomberg on stop and frisk

Addressing his history with the controversial stop and frisk policy, Mike Bloomberg claimed the number of incidents decreased by 95% while he was mayor of New York.

Bloomberg said, 'We let it get out of control and when I realized that, I cut it back by 95%. And I've apologized and asked for forgiveness. I've met with black leaders to try to get an understanding of how I can better position myself and what I should have done and what I should do next time.'

Facts First: Bloomberg was misleading by omission, as he has been before, when he cited a 95% decline in stop and frisk. While there was such a reduction, it happened only during the last two years of his 12-year mayoralty, from the first quarter of 2012 to the last quarter of 2013, following a 605% increase in his first 10 years. Looking at his entire mayoralty, from 2002 through 2013, there was a 97% increase, not a decrease.

Bloomberg also claimed the 95% was prompted by his realization that the situation was 'out of control.' He does not mention that the decline began right around the time a federal judge signaled she would rule against stop and frisk, nor that he continued to be a vocal defender of stop and frisk for years after his professed realization about the harms of the policy.

You can read more about Bloomberg's history with stop and frisk here.

'In 2016, he dumped $12 million into the Pennsylvania senate race to help reelect an anti-choice, right-wing Republican senator,' Warren added. 'And I just want to say, the woman challenger was terrific. She lost by a single point. In 2012, he scooped in to try to defend another Republican senator against a woman challenger. That was me. It didn't work, but he tried hard.'

Facts First: This is true. Bloomberg supported Republican Pennsylvania Sen. Pat Toomey's re-election in 2016. He supported Scott Brown in his losing effort against Warren in 2012. In 2014, Bloomberg gave money to a super-PAC supporting Lindsey Graham.

Bloomberg spent nearly $12 million in 2016 to support the reelection of Republican Sen. Pat Toomey of Pennsylvania, an ally of his on the issue of background checks on gun purchases. The New York Times also reported in November he supported Republican Sen. Lindsey Graham of South Carolina in 2014.

In 2012, Bloomberg supported Brown over Warren, saying on his radio program as mayor he supported Brown because of Brown's stance against requiring states to recognize concealed carry laws from other states.

Tonight, Bloomberg called such attacks a 'side show' and not relevant to his record as mayor.

'He said we should primary Barack Obama,' Biden said. 'Someone should.'

Facts First: This is true. Sanders said on a radio show in July 2011 that a primary challenge to Obama would do 'a good deal of service' to the country.

'So my suggestion is, I think one of the reasons the president has been able to move so far to the right is that there is no primary opposition to him, and I think it would do this country a good deal of service if people started thinking about candidates out there to begin contrasting what is a progressive agenda as opposed to what Obama is doing,' Sanders said on the Thom Hartmann Show in July 2011.

'I think one of the reasons that President Obama has moved as far to the right as he has is he thinks he can go all the way and no one will stand up to him,' Sanders added.

On WNYC in March 2011, Sanders said a primary challenge to Obama would 'enliven the debate.'

'I'm not a Democrat,' he said. 'I'm the longest-serving Independent. I think if a progressive Democrat wants to run, I think it would enliven the debate, raise some issues and people have a right to do that.'

Sanders went on to endorse Obama in 2012.

Klobuchar claimed on Tuesday that Sanders' ' 'Medicare For All' plan alone, on page 8, clearly says that it will kick 149 million Americans off their current health insurance in four years.'

Facts First: While Page 8 of Sanders' bill does not specifically mention the figure cited by Klobuchar, it states that 'it shall be unlawful for ... a private health insurer to sell health insurance coverage that duplicates the benefits provided under this Act.' And the Klobuchar's figure is close to the latest number provided by one study. Some 153 million people are covered by private plans sponsored by their employers, according to the latest report from the nonpartisan Kaiser Family Foundation.

There are also tens of millions more who are covered by private plans through Medicare Advantage, Medicaid managed care plans and on the Obamacare individual market.

All these people would have to change their health care under Sanders' Medicare for All plan — but they would be covered by the federal plan instead.

Sanders on Medicare for All health spending

'What every study out there, conservative or progressive says, Medicare For All will save money,' said Sanders, who came under fire for the cost of his proposal, which has been pegged at more than $30 trillion over a decade.

Facts First: Although Sanders is correct that several studies have found Medicare for All would reduce health care spending, at least one study published last year found the opposite.

A report from the left-leaning Urban Institute Health Policy Center showed that the nation's overall health care spending would rise by roughly $7 trillion to $59 trillion over a decade if Medicare for All goes into effect. The increase would be $720 billion for 2020 alone if the policy were enacted.

That's because more people would be insured, more benefits would be covered and more medical services would be used since there'd be no cost for care.

'You will in total spend more as a nation on health care from adding all the bells and whistles that are associated with these kinds of proposals,' Linda Blumberg, institute fellow, said when the study was published last October.