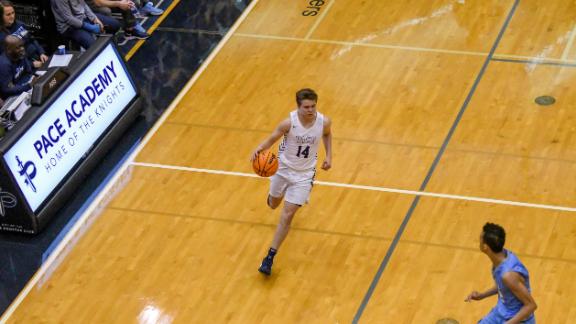 18-year-old Daniel Lucke, manager for a high school basketball team in Georgia, made a movie-worthy shot when he was put in on Senior Night.

As the final seconds ticked off the clock and the buzzer sounded, Atlanta's Pace Academy team manager Daniel Lucke, 18, found himself mobbed by the home crowd in his first career varsity basketball game.

The reason for the crowd's excitement was Lucke's incredible buzzer beater to end the game.

With four seconds left, Lucke dribbled the ball past midcourt, deftly crossed his defender up (who fell helplessly to the ground) and launched a deep shot from several feet behind the three-point line.

As if he were mimicking Kobe Bryant, Lucke maintained his follow through as he backed away watching his shot swish through the net.

"I felt like my dream had come true right then," Lucke told CNN. "For a long time when I was younger it was my biggest dream to be a varsity basketball player, and to see it come to fruition years later, even just for one night, was surreal."

This moment has been building up for two years, as Lucke has selflessly committed himself to managing the basketball program at Pace Academy, coach Sharman White tells CNN. While Lucke is not a player, White decided that on senior night they would reward him for his years of service by allowing him to see some game action.

"I really just wanted him to enjoy the moment," White said. "Didn't know what that would look like, but he definitely made the most of it."

Lucke scored five points that night. The game was out of hand at that point, as Pace Academy won 78-47. However, the way the crowd reacted to the shot made it seem as if Lucke had just won the game for the team.

"Daniel is popular because he is a great young man who is liked because of his character, selfless personality and because he makes being a team manager cool," White said.

"I knew I wanted to get a three," Lucke said. "The crowd was cheering for me and I got so into the performance of it that I just really wanted to give them something worth their while. In my head I just thought any three would do, so I had it in mind to get one from somewhere, but once the defender fell, I knew I had to seize the opportunity no matter how far out I was."

While Lucke will soon be leaving Pace Academy and going to Notre Dame in the fall to study business, he will forever remember and cherish this night.

"I think the crowd's reaction and their support was far more memorable than anything I did in the game," Lucke said. "Getting to feel that love from my classmates was incredible and it's really a testament to the type of people at my school and the community we have."

Huntsville prepares for another protest after violence Monday night