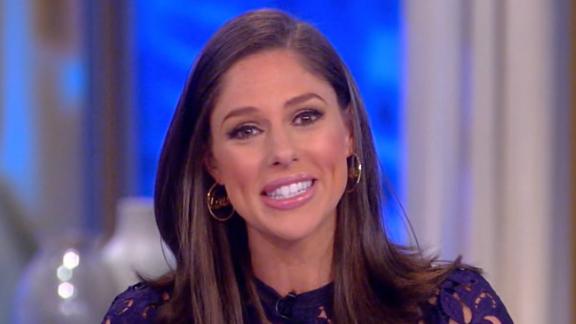 In a surprise departure from the show, Abby Huntsman announced on air she is leaving "The View" to work on her father's 2020 gubernatorial campaign.

Abby Huntsman, who has co-hosted 'The View' since 2018, announced on Monday that she was departing the popular ABC daytime talk show. The move came amid Huntsman's complaints about a troubled culture at the show and recent tensions between her and co-host Meghan McCain.

'This is always such a hard thing to do,' Huntsman said at the top of Monday's episode of the show. 'And especially this table because this is a really special table. The most iconic show I think on television and the smartest women that I've ever worked with. But today I'm saying goodbye.'

Huntsman, whose last day will be Friday, said she wanted to join the gubernatorial race of her father, Jon Huntsman, the former Utah governor who announced last November that he is running for the job again in 2020.

But behind the scenes, there was more to her surprise announcement. Half a dozen people who spoke to CNN Business described a toxic work environment, including a soured relationship between Huntsman and McCain. The dispute with McCain was just one factor in Huntsman's feeling that she should leave.

Huntsman and McCain, both of whom hail from famed Republican families, were allies behind the scenes until recently, when there was a dispute between the two women, some of the people familiar with the matter told CNN Business.

The conflict was over Huntsman's on-air enthusiasm for her children, the people said. McCain, who wrote an op-ed in The New York Times about her miscarriage last summer and has continued to talk publicly about her fertility challenges, suggested to Huntsman that the child-centric chats were insensitive.

Following one episode, McCain confronted Huntsman for bringing up her kids on the show. Word of the 'baby fight,' as one person called it, quickly spread around 'The View' and strained the relationship between the two women.

'Abby was sick of being berated by Meghan for perceived slights,' one of the people said. 'She ultimately decided she didn't need this job and it wasn't worth it.'

Huntsman and McCain have since made amends over the argument, according to three people.

Huntsman met with Barbara Fedida, senior vice president of talent at ABC News, last week to inform her that she had decided to leave the show. During the meeting, Huntsman brought up what she saw as the overall toxic work environment at 'The View,' something she had done before, three of the people familiar with the matter said.

The stress-inducing environment at 'The View' is not new. For years, the show has had a high-wire culture in which clashes between hosts either take place on-air or are leaked to New York City tabloids. A book was even released in 2019 chronicling some of the drama that has taken place behind the scenes.

Recently, Huntsman apologized to some of the hosts on 'The View' for having neglected her relationships with them and not having been as engaged as she would have liked, two of the people said.

Despite the tensions that have existed between them, McCain on Monday wished Huntsman 'nothing but the best on her next chapter.'

'I think leading a gubernatorial campaign is a really good reason to leave the show,' McCain said during Monday's show, adding, 'We all love you so much.'

Huntsman and McCain hugged at the conclusion of Monday's show.

McCain has felt isolated at 'The View' for months, and mulled leaving the talk show over the summer.

'Meghan has been miserable there for quite some time, and not because of Abby. She wishes her nothing but the best,' one of the people, a person close to McCain, said.

In a statement to CNN Business, an ABC spokesperson said on Monday, 'We have an incredible panel of smart, dynamic women at 'The View,' who bring tremendous passion and a strong point of view to the show every day. They can discuss difficult issues and debate both sides fiercely and then agree to disagree and return to the table for the next hot topic.'

'There has always been a fascination with the behind-the-scenes at the show since the show began, but they do a tough job by going out there every day to share their opinions and beliefs on live TV,' the ABC spokesperson added.

The casting concerns are important not just to the show but to ABC, which depends on stable franchises like 'The View' at a time of instability across the broadcast television business.

'The View' averages about 2.5 million viewers each day, making it one of the top five daytime talk shows in America.

Huntsman left open the possibility of one day returning to 'The View.'

'Life is funny that way,' she said.

48 people die from coronavirus in Alabama