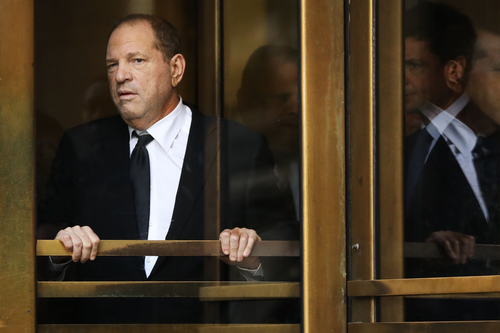 The complaint was filed on behalf of Kaja Sokola in New York State Supreme Court and lists Weinstein's brother Robert Weinstein, Disney and Miramax as defendants.

Sokola accuses Disney and Robert Weinstein of negligence, saying their conduct, 'including the negligent retention and/or supervision of Harvey Weinstein and affirmative acts covering up and empowering Harvey Weinstein to commit sexual assaults, resulted in Harvey Weinstein's commission of the Child Sex Crimes against Plaintiff.'

Sokola originally filed a complaint against the defendants under a pseudonym as part of a class action suit.

In a statement to CNN, Sokola said, 'I cannot accept the proposed 'global settlement' as fair or just. There is no accountability for the perpetrators, insufficient compensation for all of the victims and millions of dollars going to people that I believe enabled Weinstein.'

In 2018, Weinstein's then-attorney Benjamin Brafman called Sokola's claim, filed under Jane Doe, 'preposterous.' Brafman said, 'Like so many other women in this case who have already been exposed as liars, this latest completely uncorroborated allegation that is almost 20 years old will also be shown to be patently false.'

Sokola, who lives in Poland, alleges that in 2002, when she was 16, she met Weinstein at a modeling event in New York, according to the complaint.

She claims Weinstein learned she was interested in acting, gave her his card and told her they would have lunch to discuss her future.

Three days later, Sokola says, Weinstein called her, invited her to lunch and said his driver would be picking her up. She agreed and it was her understanding this was a business lunch to discuss her future and career, according to the complaint.

In the car with Weinstein, Sokola told him how old she was and that she was from Poland, but instead of going to a restaurant, Sokola claims the driver took them to Weinstein's SoHo apartment, where she says he sexually assaulted her.

Sokola alleges Weinstein told her to take off her clothes, at which point she was 'terrified' and 'felt as though she was no longer in control of her body,' according to the complaint.

During the incident, Sokola claims, 'Harvey Weinstein threatened and pressured Sokola, saying that he had 'made' the careers of Penelope Cruz and Gwyneth Paltrow, and that neither would be working without him.'

Weinstein began touching Sokola's vagina and he forced her to touch it as well, according to the complaint.

Sokola alleges Weinstein took off his pants next, and according to the complaint, 'forcibly held Sokola while taking her hand and making her touch and massage his penis while he grabbed at her breasts.'

The complaint alleges that after Weinstein ejaculated on the floor, Sokola tried to leave the apartment but Weinstein blocked the door and yelled at her to calm down. Weinstein insisted that what had happened was 'normal,' according to Sokola.

When she was finally able to leave the apartment, Weinstein told her she needed to work on her stubbornness, according to the complaint.

Sokola suffers from long-term depression, anorexia and difficulty maintaining healthy relationships with men, according to the filing.

She is seeking a number of damages, according to the complaint, as well as a money judgment for 'mental pain and anguish and severe emotional distress.'

CNN has reached out to all defendants in this complaint for comment.