Maryland police shoot and kill a man who stabbed 5 people 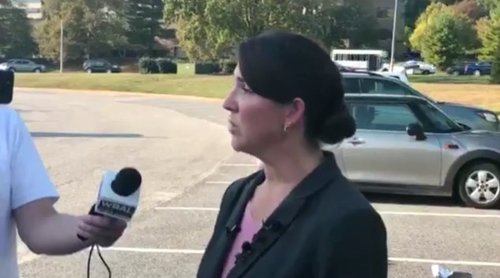 Reports came in around 1:45 p.m. ET of a man threatening people and demanding money at a liquor store at the Hunt Valley Towne Centre in Cockeysville, near Towson, Baltimore County police spokesperson Jen Peach said during a press conference.

The man stabbed four people in the liquor store, then fled and stabbed another person in front of a Noodles and Company restaurant, Peach said.

Witnesses told CNN affiliate WJZ-TV that liquor store employees asked the man to leave the store twice. The man left, changed his clothes and came back with a knife, witnesses said. Employees and customers grabbed wine bottles to defend themselves.

Officers caught up with the suspect at an intersection before the fatal shooting. The man has not been identified, Peach said.

It's unknown how many officers shot the man or how many rounds were fired, Peach said. Authorities have not said whether the suspect was threatening officers.

The restaurant was closed for the rest of the day Saturday, the company said in a statement to CNN.

'We are shocked by this senseless crime and are working closely with authorities to determine the sequence of events,' Danielle Moore, company spokesperson, said in a statement. 'Safety is our top priority and there is no greater priority than the safety and well-being of Noodles' guests and team members.'