They came to enjoy paradise. Now, they're helping their Bahamian neighbors recover from Dorian's wrath 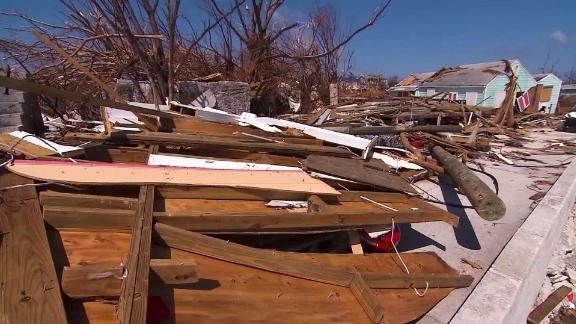 Patrons of a vast resort community in the Bahamas chip in to help with the fallout after Hurricane Dorian. CNN's Paula Newton reports

The fire chief in this now-battered corner of the Bahamas never wanted the majestic resort, with its private golf course and hundreds of high-end mansions, built on this islet in the heart of the Abaco islands.

'I am not the biggest fan of Baker's Bay. I didn't want that golf course built. I was fighting it for 10 years,' Troy Albury, of the Great Guana Cay Fire Department, said of the 585-acre club that caters to wealthy, often-famous patrons who arrive from far beyond its crystal blue waters.

But since Hurricane Dorian tore a Category 5 path just south of the exclusive Baker's Bay Golf & Ocean Club, it's been patrons of the vast resort community -- itself devastated by the storm -- that have harnessed their considerable resources to rush help to nearby neighborhoods that were left in splinters.

'They have been our savior during this,' Albury told CNN.

While official help was slow to arrive after the strongest hurricane ever to make landfall in the Bahamas, Baker's Bay patrons sent private helicopters and supplies and even evacuated the injured and vulnerable, said residents who in ordinary times wouldn't be allowed even to set foot in the manicured, members-only enclave that covers a huge swath of their island.

New England Patriots quarterback Tom Brady mentioned his own ties to the area as he appealed online for donations to an Abaco relief fund.

'Our family has been traveling to the beautiful paradise of The Abacos for many years and we are devastated by the events of this tragic hurricane,' he wrote in an Instagram post. 'While visiting we've built relationships with the incredible Bahamians who call these islands home, and now it's our responsibility to help them.'

Meantime, neighbors in Great Guana Cay have largely helped themselves, stocking food and medical supplies in a church they converted into a shelter. Rescuers have also arrived, moving from one home to another, trying to assess the magnitude of damage.

2,500 people are listed as missing

The first sweep of hard-hit northern islands -- where some 70,000 people have lost almost everything -- has been completed, including at least a first check for anyone in need of rescue, food or water and an assessment of damage and sanitation needs, said Daniel Gajewski of Fairfax County, Virginia's Urban Search and Rescue team.

'Lately it has been a lot of reconnaissance, a lot of building structures, and then from there we're getting a pulse on the locals,' said Gajewski, who was deployed through the US Agency for International Development, or USAID.

Dorian's official death toll in the Bahamas now stands at 50, police said, though the grim number is expected to rise. Some 2,500 people are listed as missing in a government registry, Bahamas' National Emergency Management Agency's spokesman Carl Smith said Wednesday, though he warned that each name was not confirmed.

USAID will continue to help with recovery efforts, taking cues from the Bahamian government, the agency said. Many locals have lost everything and have no insurance because costs had skyrocketed in recent years.

So far, about 5,000 people have escaped the Abaco Islands. And while Prime Hubert Minnis has said evacuees will be able to come back, no one knows how long the recovery will take.

'So many people here are living in homes that are not suitable to be lived in here in Freeport and in Grand Abaco,' CNN's Patrick Oppmann said Tuesday from the city on Grand Bahama island.

'We need help, lots of help'

'There are a lot of people there and they haven't had any food or water,' he told CNN. 'They had not seen any people.'

In Marsh Harbour, about 1,100 buildings were destroyed, according to satellite images from the humanitarian agency, Map Action.

Just a ferry ride away, back on Great Guana Cay, residents are grateful to the affluent benefactors whose local ties moved them to dispatch aid days before the authorities arrived.

'I guess it's time to bury the hatchet with Baker's Bay,' Albury, the fire chief, said.

Still, they struggle to grasp the rebuilding task ahead.

'This is going to take a lot of money, a lot of time and a lot of dedication,' he said. 'We need help, lots of help.'