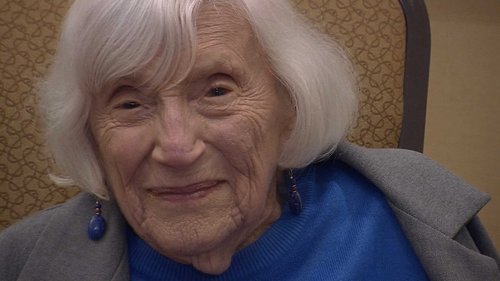 PORTLAND, ME (WMTW) -- A 99-year-old Holocaust survivor who spied against Nazi Germany during World War II is humble as she shares her incredible story with Mainers.

"I did not feel that I was brave. I just did the job that I needed to do," Marthe Cohn said.

Cohn was 24 when she was asked to be a spy for the Free France government.

"During the war you age very fast. You mature very fast," Cohn said.

Cohn spent one month in Nazi Germany as a French Jewish spy. She interrogated colonels and generals, reported the Germans' plan of retreat and uncovered other secrets for the French military.

"There were many times where I was in great danger, but I always got out of trouble by answering the right answer," Cohn said.

She was able to conceal her identity with her blond hair and fluent German. She also changed her name to Marth Ulrich.

Cohn said she still instinctively uses the skills she learned as a spy.

"Even now wherever I am I check everybody and I know always how many people are around," Cohn said.

Cohn received the highest military honor from the French, and she published a book about her experience in 2002 called "Behind Enemy Lines."

"People have a very short memory, and have to be reminded what was going on because history repeats itself. And if you don't know what happened in the past you can't prepare the future," Cohn said.

She offered important advice to the young people of today

"Be engaged and do not accept any order that your conscience would reject."

‘I’m ashamed of myself:’ Juror in Mike Blakely’s trial says she didn’t mean to convict him

‘I never got to say goodbye:’ Guntersville woman urges vaccination after losing husband to Covid-19

1 killed in crash near Arab