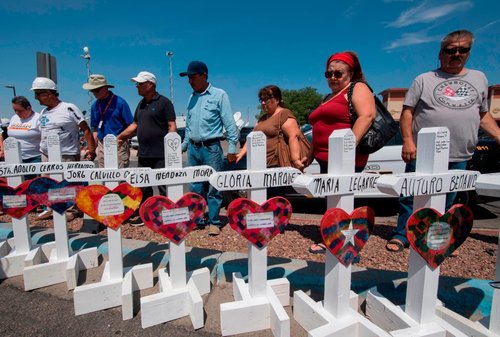 As many try to process yet another mass shooting in the US, organizations across the country are stepping up to help the victims of the mass shootings in...

As many try to process yet another mass shooting in the US, organizations across the country are stepping up to help the victims of the mass shootings in Dayton, Ohio, and El Paso, Texas.

At least 31 people were killed in the two shootings that took place within 13 hours over the weekend.

The El Paso shooting took place in a Walmart, and the superstore is committing $400,000 to help the victims and their families.

Now the NFL is also getting involved and showing its supports to the victims of both shootings.

The Houston Texans is teaming up with the NFL Foundation, the league's nonprofit, to donate $100,000 to the El Paso victims' fund -- El Paso Community Foundation.

"In the wake of Saturday's tragic events in El Paso, Texas, the Houston Texans foundation and the NFL Foundation will donate $100,000 to the El Paso Victims' Fund -- El Paso Community Foundation to help those impacted," The Texans said in a statement on Wednesday. The Fund is working with the County of El Paso and the City of El Paso to aid affected families."

The Dallas Cowboys and its nonprofit organization, the Gene and Jerry Jones Family Foundation, have committed $50,000 to the El Paso victims' fund.

"Our hearts and support are with the entire El Paso community and especially with the families of the victims of this very tragic event," said Cowboys Executive Charlotte Jones Anderson. "Our organization has long enjoyed a wonderful following from the people of El Paso, and our wish is that so many others in Texas and around the country will be inspired to assist the loved ones who are grieving."

The Cincinnati Bengals and the NFL Foundation are donating $75,000 to the Dayton Oregon District Tragedy Fund. The money will go to the families directly affected by the mass shooting in Dayton, Ohio.

"Dayton is part of our community and we are saddened by the tragic events that took place this weekend," said Bengals Executive Vice President Katie Blackburn. "Our thoughts are with the victims, their families, and all of those affected."