Pilot arrested after plane crash had been arrested before 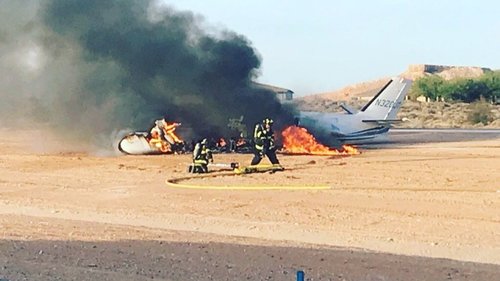 Mesquite, NV (KTNV) -- UPDATE JULY 18: The pilot who was arrested after crashing his plane on Wednesday in Mesquite has been in trouble before.

According to Spokane County courts, 41-year-old Ryan Dashiell was arrested before for driving under the influence in October 2007. In November of the same year, he pled guilty to negligent driving.

FAA information also shows that Dashiell was not supposed to be flying the Cessna 550 jet without a co-pilot. He was the only person on board the jet when it crashed.

UPDATE 11:30 P.M.: Police believe the pilot of the plane that crashed Wednesday night at Mesquite Municipal Airport was under the influence of alcohol during the incident.

41-year-old Ryan Dashiell of Spokane, Washington, was arrested for suspicion of operating an aircraft while under the influence of intoxicating liquor, a gross misdemeanor, and is being transported to Clark County Detention Center.

The Mesquite Police Department is cooperating with the Federal Aviation Administration during this investigation.

ORIGINAL STORY One person was transported to the hospital after a jet that was headed to Henderson crashed in Mesquite and then caught fire, according to the Federal Aviation Administration.

The pilot, who was the only person on board, was transported to a hospital in unknown condition.

The plane, a twin-engine Cessna 550 jet, was flying from Pasco, WA to Henderson Executive Airport.

Authorities say it crashed under unknown circumstances while landing at Mesquite Airport around 7:20 p.m. and then caught fire.

The FAA and National Transportation Safety Board are investigating.

‘It can infect anybody:’ Marshall County family’s message after 5 survive coronavirus

All North Alabama Businesses that Got Paycheck Protection Loans

Mandatory mask order begins for all of Madison County at 5 p.m. Tuesday