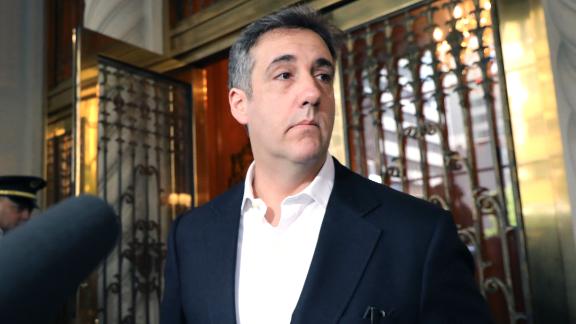 The full search warrant and related materials for Michael Cohen have been released in a court filing in federal court in Manhattan. CNN's Kara Scannell has more.

Federal search warrants released Thursday detail how Donald Trump and his allies scrambled in the final weeks of the 2016 campaign to arrange a hush-money deal to hide his alleged affair and contain the fallout from related stories in the press.

The documents are the first time that the US authorities have identified Trump by name and allege his involvement at key steps in the campaign finance scheme. Authorities had previously referred to Trump in court filings as 'Individual 1,' the person who directed Cohen to make the payments. Trump has publicly denied making the payments. Cohen pleaded guilty to two campaign finance crimes, among others, and is serving a three year prison sentence.

Prosecutors with the US attorney's office in the Southern District of New York revealed in a letter filed Thursday that they had started -- and closed -- an investigation into whether any individuals 'made false statements, gave false testimony or otherwise obstructed justice in connection with this investigation.'

The letter confirmed, as CNN reported Friday, that prosecutors had 'effectively concluded' its investigation into whether anyone else would be charged in the campaign finance scheme.

The letter doesn't say whose conduct prosecutors were reviewing but a footnote to the search warrant affidavit noted that Hicks said she had learned about the Stormy Daniels' allegations in November, a month after the first of the calls. A person familiar with the matter said that is a reference to Hicks. Hicks told CNN her testimony was accurate.

The documents show that immediately after the 'Access Hollywood' tape came out in October 2016, there was a mad scramble inside the Trump campaign to contain the damage and suppress additional allegations of a sexual nature from reaching public view.

The day after the tape came out, campaign spokeswoman Hicks called Cohen and candidate Trump joined, according to the documents. From there Cohen, acting as a middleman, was involved in at least 10 telephone calls that day, some involving Trump and Hicks and others involving American Media Inc. executives David Pecker and Dylan Howard. AMI owns the National Enquirer tabloid.

Those conversations, FBI officials believed, were apparently about Daniels, an adult film actress also known as Stephanie Clifford, according to the documents.

Following the last of the calls, Howard sent a text to Cohen confirming the deal. 'Keith will do it. Let's reconvene tomorrow.' Keith is Keith Davidson, Daniel's attorney, according to the court filing.

'Based on the timing of these calls, and the content of the text messages and emails, I believe that at least some of these communications concerned the need to prevent Clifford from going public, particularly in the wake of the Access Hollywood story,' an FBI agent wrote in the court documents.

What the parties discussed on the calls is not in the search warrant materials.

Cohen was also in contact with Davidson directly and they later discussed the shell company that Cohen formed to eventually facilitate hush-money payments to Daniels.

'Michael -- if we are ever going to close this deal -- in my opinion, it needs to be today.' Davidson wrote in a text message the following day.

Last year AMI struck a non-prosecution agreement with prosecutors admitting its involvement in a scheme to 'catch and kill' news stories and gossip items that could damage Trump.

What the documents show

The communication between Cohen and Trump increased during this period, according to the FBI filing, which said previously Trump and Cohen had spoken 'about once a month.'

The documents further reveal that Trump spoke with Cohen on the phone at least twice on the day that Cohen initiated a $131,000 wire transfer, money that would eventually make its way to Daniels.

The date was October 26, 2016, less than two weeks before the general election. Within 30 minutes of speaking to Trump, Cohen called up his bank, opened a new account, and transferred $131,000 to that new account. All the while, Cohen was also in communication with Daniels' lawyer and giving him wiring instructions, according to the filings.

The timing is key because prosecutors have previously alleged that Cohen acted 'in coordination with and at the direction' of Trump when he made the payments, which were illegal under federal campaign finance laws.

Two days later, on October 28, Cohen and Trump spoke just before noon for five minutes. That evening, according to the FBI, Davidson assured Cohen the settlement paperwork was nearly finalized. 'all is AOK. I should have signed, notarized docs on Monday,' Davidson said in a text message to Cohen.

Davidson several days later confirmed to Cohen he had transferred some of the payment to Daniels. He also emailed Cohen an audio recording of Daniels saying she didn't believe allegations made by another woman. Cohen tried calling Trump and after he couldn't reach him, he tried Conway. Conway called Cohen back and they spoke for six minutes, according to the documents. It is not clear what Cohen and Conway spoke about from the documents or what followed their conversation. Trump was elected President a week later.

Prosecutors said in Thursday's filing that they considered whether anyone had lied or obstructed the inquiry. While they don't identify anyone by name, the FBI affidavit says that Hicks called Cohen in October and Trump joined the call. It says Trump was either conferenced into the call or it was transferred to him. Cohen spoke with Hicks at least two other times that day, including just before and after he spoke with AMI executives.

In a footnote to the court filing, the FBI agent writes that Hicks told a different FBI agent that she first learned of the Daniels' allegations in November, one month later.

Hicks referred questions about whether she was confronted about possibly being charged with a crime to her lawyer. Hicks told CNN that she doesn't believe anything in these documents contradict what she has previously said or testified to. She said the early October conversations with Cohen were regarding the 'Access Hollywood' tape.

'He was clearly motivated to do something that I wasn't aware of,' Hicks said. 'Nothing contradicts what I've said.'

The full search warrant and related materials for Cohen were released Thursday after Judge William Pauley ruled that previously redacted portions of it related to the campaign finance violations 'are a matter of national importance.'

A redacted version of the document was released in March -- the new filing contains unredacted portions including those related to campaign finance.

They were made public after Pauley ruled that 'the campaign finance violations discussed in the Materials are a matter of national importance.'

Pauley ordered those sections to be unredacted after prosecutors informed the judge that they had 'concluded' their investigation into the Trump Organization relating to Cohen's campaign finance violations.

A number of news organizations, including CNN, had asked to unseal copies of the search warrants and affidavits relating to the April 2018 raids on Cohen's hotel room, home and office.

In March, the judge ordered prosecutors to release the search warrants materials but allowed them to keep the sections relating to campaign finance under seal because of an ongoing investigation.

Of the nearly 900 pages relating to the search warrants that were released, there were redactions spanning over 20 pages under the heading 'illegal campaign contribution scheme.' Some of the pages contain duplications.

When Cohen pleaded guilty, he implicated Trump, saying he facilitated the payments 'in coordination with and at the direction of' a presidential candidate. He later identified Trump by name in testimony before Congress. Prosecutors identified the person as 'Individual 1' in court filings who they said had 'become the President of the United States.'

Trump's name has not been explicitly stated by prosecutors in any court filings related to Cohen's campaign finance case.

The conclusion of federal prosecutors' investigation of the Trump company's role in the Cohen matter marks a significant victory for the President's family business. An attorney for the company declined to comment.

A lawyer for Trump, Jay Sekulow, said: 'We are pleased that the investigation surrounding these ridiculous campaign finance allegations is now closed. We have maintained from the outset that the President never engaged in any campaign finance violation.'