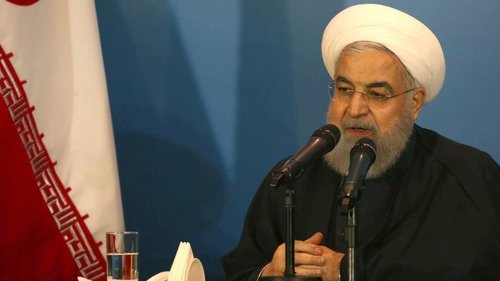 Iran accused the United States Tuesday of lying about wanting to resume talks between the two countries in the wake of new...

Iranian President Hassan Rouhani says the White House is 'suffering from mental disability' and behaving as 'no sane person,' in the wake of new sanctions imposed by President Donald Trump earlier this week which an Iranian spokesman said have closed the 'channel of diplomacy forever.'

The fresh sanctions -- partly in retaliation over the downing of a US drone last week -- target Iran's supreme leader Ayatollah Khamenei and several other high-ranking officials.

Tensions between the countries are now at their highest level in years, coming on the back of last week's downed US drone, but also stretching to 2018 when Trump walked away from the Iranian nuclear deal implemented by his predecessor Barack Obama.

Iran has since threatened to exceed enrichment limits allowed under the nuclear deal and is blamed by the US for attacks on two tankers in the vital Gulf of Oman waterway earlier this month. Iran denied responsibility for the ship attacks.

Accusing the Trump administration of mental disability, Rouhani also said Tuesday that those 'in charge of the White House are feeling frustrated' by the state of play in the region, reported the semi-official Tasnim news agency.

Rouhani added that the US had wrongly expected to 'create chaos' in Iran in two to three months, during his speech to senior health officials.

After weeks of buidling tensions, Trump threatened airstrikes on Iran last week -- calling them off just minutes before they were due to begin -- and on Tuesday his national security adviser, John Bolton, continued the administration's tough rhetoric.

Bolton referred to Iran as a 'radical regime' that supports 'violent provocations abroad,' ahead of a trilateral meeting with his Israeli and Russian counterparts in Jerusalem.

But he also added that Trump had 'held the door open to real negotiations.'

'All that Iran needs to do is walk through that open door,' said Bolton, known for being one of the administration's most hawkish advisors on Iran.

Rouhani, in response, accused the US of 'lying' about wanting to resume talks between the two countries.

'You say you really want to hold talks with us,' he said during a press conference Tuesday, state-run Press TV reported.

'But at the same time you're saying that you want to boycott and sanction our foreign minister, so you're lying,' Rouhani said.