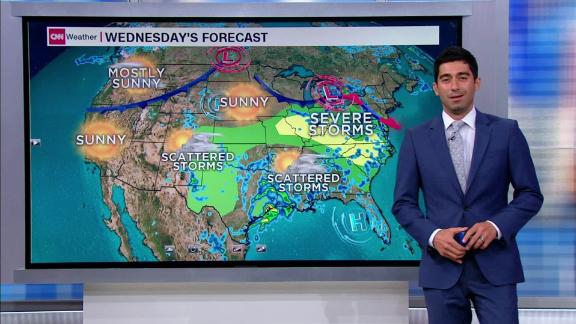 Tropical moisture from a remnant low near Mexico is beginning to push rain up into an already flood ravaged central US. Pedram Javaheri has the details on how long we can expect the rain.

Want to visit Cuba? Well, you can't go on a cruise ship, thanks to new government regulations.

Here's what else you need to know to Get Up to Speed and Out the Door. (You can also get "5 Things You Need to Know Today" delivered to your inbox daily. Sign up here.)

1. President Trump in the UK

President Trump is headed to Portsmouth this morning, where he'll join Queen Elizabeth and other royals, plus Prime Minister Theresa May and other politicians, for a ceremony marking the 75th anniversary of the D-Day invasion. Veterans of the Normandy landings will also be there. In an interview earlier with British TV, Trump said he talked with Prince Charles about climate change and was "moved" by his passion on the subject (Trump's skepticism on man-made climate change is well known). The President later today stops in Ireland before heading to France for another D-Day ceremony.

Meanwhile, back home in Washington, Trump's threat to impose tariffs on Mexico as a way to pressure the nation on immigration is meeting fierce resistance -- from his own party. Some GOP senators told White House and Justice Department officials the plan is ill-advised, and Senate Majority Leader Mitch McConnell said there isn't "much support" for it. Elsewhere in the world, Chinese President Xi Jinping travels to Russia today for a three-day state visit with Russian President Vladimir Putin.

The former school resource officer who stayed outside Marjory Stoneman Douglas High School during the 2018 massacre faces felony charges. Scot Peterson, an ex-Broward County sheriff's deputy, has been charged with 11 counts, including felony child neglect charges. He's been criticized for not going into the school to try to stop the shooting. Instead, Peterson took a position outside a school building and stayed there for more than 45 minutes as the gunman fired dozens of shots. An arrest warrant says Peterson lied to investigators by saying he heard only a couple shots after he arrived at the school building. Seventeen people died in the massacre, one of the worst shootings in US history.

Four people were killed yesterday in the northern Australian city of Darwin in what's being described there as a mass shooting. Of course, an act of violence like this one is (sadly) not exactly shocking news in the United States, but it's sent shock waves through Australia, which is known for its strict gun control laws. A gunman opened fire with a shotgun in several locations; a man was taken into custody about an hour later. It's the worst shooting rampage in Australia since gun laws were tightened after a 1996 massacre at a popular tourist spot.

Three deaths in five days. That's the scary stat coming out of a resort in the Dominican Republic. A Pennsylvania woman died May 25 at the Bahia Principe Hotel in La Romana. The 41-year-old woman had just checked in and was having a drink from the minibar when she collapsed. Five days later, hotel employees found a Maryland couple dead in their room at the resort. An autopsy showed they had respiratory failure and pulmonary edema, a condition caused by excess fluid in the lungs. It's not clear if there's any connection between the deaths of the woman and the couple, although all three of the Americans checked into the hotel on the same day.

Think you're doing your body a favor by eating chicken breast instead of steak? Think again. Eating white meat is just as bad for you as eating red beef, at least when it comes to your cholesterol levels, a new study says. Researchers from the University of California, San Francisco tested the long-held belief that the generally high saturated fat content of red meat raises LDL (the so-called "bad" cholesterol) levels in the bloodstream. Elevated cholesterol levels increase chances of a stroke or heart attack. What researchers found was there was no difference in the cholesterol levels of study participants after they consumed diets of red and white meat for four weeks each. Still, the researchers say eating white meat may still be better for your heart because there may be other effects from eating red meat that contribute to cardiovascular disease.

The number of people evacuated in Alberta, Canada, as wildfires torch through more than 700,000 acres of land

The point gain yesterday for the Dow, the second best day for stocks so far this year

We thought TV's reboot fever had passed. But no, now they're thinking about bringing back "Punky Brewster."

Still looking for the "Rainbow Connection?" You can find it, again, on the big screen as "The Muppet Movie" returns to theaters for its 40th anniversary.

From Russia with love?

Live in Russia and use Tinder? Just be aware that all those digital love notes will be shared with your boo ... and the country's spy agencies.

A homeless man is going back to the University of Texas -- after 40 years -- to finish his degree. And his tuition will be paid, thanks to a student and an alum.

Despite some news reports, Jussie Smollett is not coming back to "Empire," series creator Lee Daniels says.

A trip to Disney World won't be so expensive for a family of seven after a Minnesota teen baked enough cupcakes to finance the whole vacation.

"I'm glad they're bringing some color to the show."

Some of the oldest people in the world live on the Japanese island of Tokunoshima. What's their secret? Alcohol, apparently. (Click to view.)

When will you get your coronavirus stimulus cash, and how?