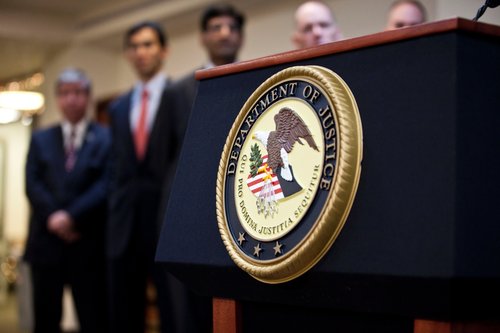 A former intelligence analyst for the National Security Agency and National Geospatial-Intelligence Agency was arrested Thursday morning and charged with pro...

A former intelligence analyst for the National Security Agency and National Geospatial-Intelligence Agency was arrested Thursday morning and charged with providing classified information and documents to a reporter.

He is accused, in part, of printing 36 documents from his NGA computer in 2014, including 23 unrelated to his duties at the agency, and providing 'at least 17 to the reporter and/or the reporter's online news outlet, which published the documents in whole or in part. Eleven of the published documents were classified as Top Secret or Secret and marked as such.'

The indictment of Hale comes amid a spate of court cases the Justice Department has opened against alleged government leakers — ranging from charges against two individuals who allegedly passed internal banking information to news outlets and others and to the high-profile arrest of WikiLeaks founder Julian Assange last month following his indictment for conspiracy to commit a computer crime.

Some of the cases have prompted questions over press freedom and furthered critics' concerns over the Trump administration's response to damaging news stories.

Hale first met the reporter in April 2013 at a Washington, DC, bookstore, while he was working as a cleared defense contractor at NGA, according to the indictment. He messaged a friend, saying that the reporter wanted him to talk about 'working with drones' at a documentary screening, the indictment stated. Hale and the reporter continued communicating via an encrypted messaging service.

The evidence, according to the indictment, was found on Hale's home computer and two thumb drives, and his cell phone contact list included the reporter's contact information. One of the thumb drives contained Tor software and Tails operating system, which the reporter's online news outlet wrote about in instructions for readers to anonymously leak documents to them.

The indictment did not name the reporter or news organization.

The 11 classified documents that were published by the reporter's online news outlet, and later in a book, included PowerPoint presentations on military and counterterrorism operations and a document describing a military campaign targeting al Qaeda overseas.