Kentucky Derby winner Country House will not run in Preakness 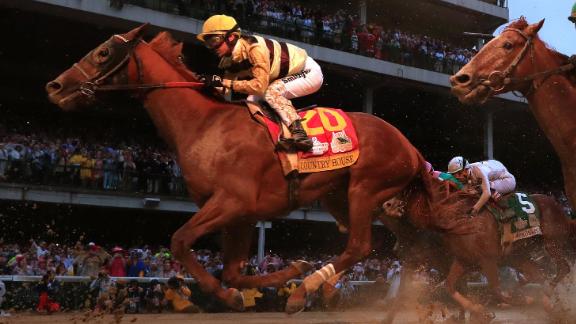 Kentucky Derby winner Country House will not run in the Preakness Stakes, trainer Bill Mott told CNN on Tuesday, meaning that there will be no Triple Crown winner this year.

'He is out of the Preakness. As of noon time today, he has developed a fever and his blood work indicates a possible infection or viral infection,' Mott said.

The development was first reported by the Daily Racing Form.

In an interview with CNN earlier in the day, Mott was noncommittal about his horse running the Preakness, saying at the time: 'If he's doing very well, we will. I don't feel like we've got any pressure to go other than the fact that the Derby winner usually goes to the Preakness and people are looking forward to seeing him there. We're going to monitor his progress in the next week and 10 days and then decide.'

Country House was declared the winner of the 145th Kentucky Derby on Saturday after Maximum Security, who led the Derby from wire to wire and crossed the finish line 1 3/4 lengths ahead of Country House, was disqualified for interference while turning for home.

Officials decided that Maximum Security impacted the progress of War of Will, which in turn interfered with Long Range Toddy and Bodexpress.

Barry Stilz, an attorney for Maximum Security's owner, Gary West, told CNN on Tuesday they intend to seek out additional legal options after an appeal was denied on Monday by the Kentucky Horse Racing Commission.

West said on Monday that Maximum Security won't run in the Preakness. The race, the second leg of the Triple Crown, is May 18.