Paralyzed pup learns to walk again thanks to dog rehab 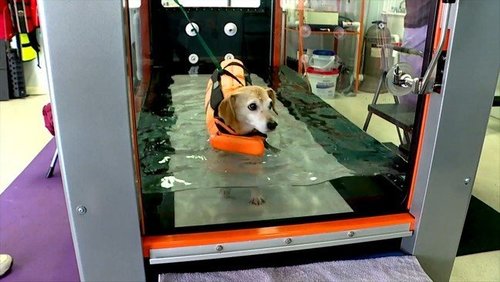 ASHEVILLE, N.C. (WLOS) -- Chris Allen and his dog Del have been together for 15 years. Chris found Del running down the middle of the street in Maggie Valley when he was just one year old.

"The is just the best little guy in the world," Allen said of his pup.

But a few years ago, Allen watched as his best friend lost his ability to walk, or even feel, from the waist down.

"He was fine one day, and then he became completely paralyzed that night," he said.

Allen rushed Del to the emergency veterinarian where he was diagnosed with a ruptured disc.

"His whole back half, he couldn't get any feeling, or move at all," he recalled.

They tried to fix the problem with an operation which removed the disc, but whether or not he would ever walk again was still unknown. That was until they found Megan Day at Wag Hab.

"We did a lot of rehabilitation in the water," Day said. "We did laser therapy. There were exercises that we had them do at the clinic and at home, to practice walking and balance, and, as you can see, he has done really well."

Chris and Del started doing rehabilitation three times a week to Wag Hab. They mainly used the water treadmill because the buoyancy made it easier for Del to re-learn how to walk.

"At the beginning, I would have to get in there with him and move his legs for him," Day said. "I probably only had to do that a few sessions before he started doing it on his own, and then he started walking on land maybe a month or two after we started."

Now, Del can walk, run, and even make his way through obstacle courses.

"He's out running and chasing deer," Allen said. "Doing all the normal things that a dog loves to do."

Police looking for thief who stole 2,000 pills from a Russellville pharmacy