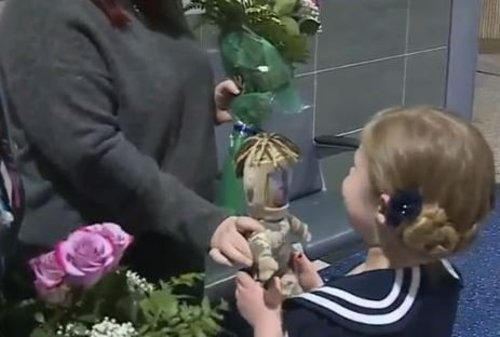 Kansas City, MO (KMBC) -- Airports are home to goodbyes and reunions. So, it was only fitting something lost was found Tuesday afternoon at Kansas City International Airport.

Dina Morley works as a valet at KCI, and Friday a customer walked up to her said she found a doll on the floor. The doll was a green and brown camouflage Huggs To Go Daddy military doll that featured a little girl and a man in a picture on the doll’s head.

“I kept it at valet services for a few days, hoping somebody would call about it or come back for it, but nobody did,” Morley said. “I just love her little smile. It’s cute. It’s very cute.”

The doll was still there Monday, so Morley and her friend, Heather Parsons, took to Facebook for help. They reached out to KMBC 9 News, and our Facebook post Monday evening about the lost doll received more than 5,000 shares in an hour.

A family friend saw the post and sent Morley a message saying she might know who it is. By Tuesday afternoon, a special reunion was taking place at KCI.

“Look at that big ol' smile,” Morley said. “Are you Katherine?”

The doll belongs to 6-year-old Katherine Whipple, and she was worried she had said goodbye to the doll forever. The doll means the world to her, especially since her father – an Army major stationed at Fort Leavenworth – is away on deployment and won’t return until this summer after being gone for a year.

“She sleeps with it pretty much every night,” Eileen Whipple said.

No one who hit share could’ve known how much that doll and photo meant to Katherine.

“We were at a daddy daughter date at Chuck E Cheese,” Katherine Whipple said about the picture proudly displayed on the doll’s face.

UAB researcher: Alabama may be just weeks away from coronavirus herd immunity

WAAY 31 News Anchor Marie Waxel is having a baby!

Multiple crews on the scene of a Huntsville structure fire