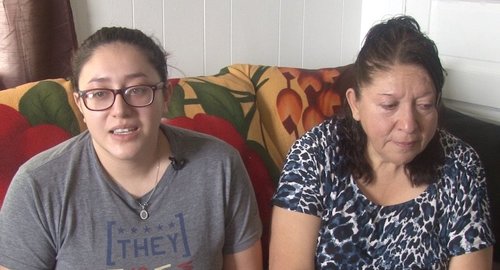 Arimon (EastIdahoNews.com) -- It’s been nearly a year, but for Silvia Gil, the pain of losing her 17-year-old son, Marcos, is still raw.

Gil is sitting on her living room couch next to her adult daughter, Alicia Vasquez. Vasquez translates for her mother as they recall memories of Marcos’ short life in eastern Idaho.

“Marcos was a really good son. He always helped us,” Gil says through tears.

It was April 28 when Marcos and his girlfriend of two weeks were in Lava Hot Springs. Gil says she was home getting ready for work when things felt off.

“She knew like a motherly instinct that something was wrong. She just didn’t know what,” Marcos’ sister, Alicia Vasquez, tells EastIdahoNews.com.

A few hours later, her premonition was confirmed. Gil received a phone call at work from police saying Marcos had been in an accident.

Gil met up with her husband in Lava Hot Springs and called Vasquez, who at home watching the younger kids.

“I didn’t quite understand what she was saying because she was sobbing. She just said, ‘Marcos. Accident.’ and I freaked,” Vasquez recalls.

Gil learned Marcos’ girlfriend had entered the Portneuf River and got caught in a current. She screamed for help, and Marcos jumped in to save her. Police say she was able to get to shore but Marcos never resurfaced.

“They were holding my dad back from the water because he wanted to jump in and save his son,” Vasquez says. “He just kept saying, ‘My son, my son, my son.'”

Hours later, Marcos’ body was pulled from the water, and his parents and seven siblings began planning his funeral.

“He was so young,” Vasquez says. “He had a future ahead of him, and he was great at everything he did.”

Marcos took care of calves for his after-school job. He also played football, baseball, church basketball and loved hanging out with his friends.

“When he walked in, his face lit up the room. He just made everybody laugh,” Gil says.

Memories of that laugh help Marcos’ family deal with their grief.

They say they still feel his presence around the house and sometimes it’s simple things, like pancakes, that cause tears to flow.

“Every Sunday, Mom just cries and cries, and if she’s making pancakes, she just thinks about him because we used to have to make extra food for him because he could eat,” Vasquez says.

On Thursday, Marcos was honored during the fifth annual East Idaho Real Heroes event, and the Gil family received an award in his memory from the American Red Cross of Idaho. As the Gils approached the stage, everyone in the audience rose to their feet and gave them a standing ovation.

Marcos should be in his senior year at Marsh Valley High School, but his family says he’s already graduated to a better place by dying selflessly so someone else could live.

“To expect anything less than what he would have done – I’m not surprised,” Gil says. “There’s not a day that goes by that we don’t think about him.”

Police looking for thief who stole 2,000 pills from a Russellville pharmacy