As snow and rain move out, winter storm brings in 'coldest air of the season' 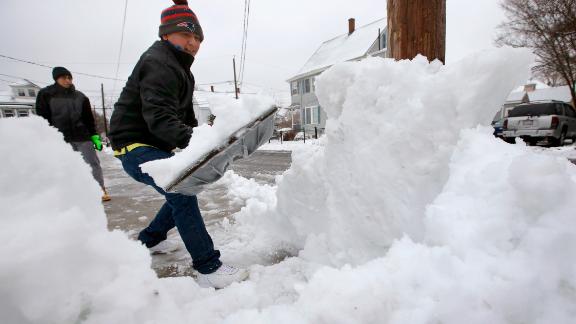 Following heavy snow in the Midwest and Northeast, millions now face the coldest temperatures in a year.

A deadly winter storm that covered a large swath of the country in snow and rain over the weekend, will freeze its way across the Northeast this week, possibly lingering through Super Bowl Sunday.

A bitter cold replaced blankets of snow and sheets of rain across the eastern US Sunday night, according to the National Weather Service.

More than 74 million Americans are under wind chill advisories for what will be the "coldest air of the season," CNN meteorologist Pedram Javaheri said.

The weather service warned residents to dress in layers and cover exposed skin to "prevent frostbite or hypothermia."

New York is under a wind advisory through Tuesday, with wind gusts expected to reach 50 mph, according to the National Weather Service.

In Boston, wind chill will make temperatures feel as low as minus 30 degrees Fahrenheit, and officials warn of icy roads and potential power outages.

Forecast models show a rapid warming trend across the East Coast by midweek, Javaheri said. But temperatures will plunge again leading into the weekend, he said.

"This secondary blast of cold air has staying power, however, and could linger up to around the time for Super Bowl Sunday (February 3)," Javaheri said.

Over the weekend, more than 100 million people were under some form of winter storm watch, warning or advisory, and states throughout the East Coast were pounded by rain, snow and ice.

The storm has left at least eight people dead.

On Sunday afternoon, a 12-year-old girl died in Arlington, Illinois, after a snowbank collapsed on top of her, police said.

According to a press release by the Arlington Heights Police Department, she was playing with a 9-year-old girl outside a church when the fort they built collapsed on top of them, trapping them under the snow. The 9-year-old girl was treated for hypothermia and is being held in the hospital for observation, according to police.

In Milwaukee, Wisconsin, officials are investigating the deaths of two men who were found dead shortly after removing snow, CNN affiliate WITI reported.

Two others were killed in a car accident in Kohler, Wisconsin, while driving on a snow-covered, slippery road, according to CNN affiliate WDJT.

In Middletown, Connecticut, a subcontractor for New England energy provider Eversource was finishing up repairs when a tree fell on top of him, killing him.

In Missouri, a 30-year-old man died after losing control of his vehicle on a snow-covered roadway and driving into the path of another car.

The Kansas Department of Transportation reported the death of one of its employees Saturday morning, during snow removal operations. Stephen Windler, 25, died after the snow plow he was operating overturned and landed on top of him, according to the Kansas Highway Patrol.