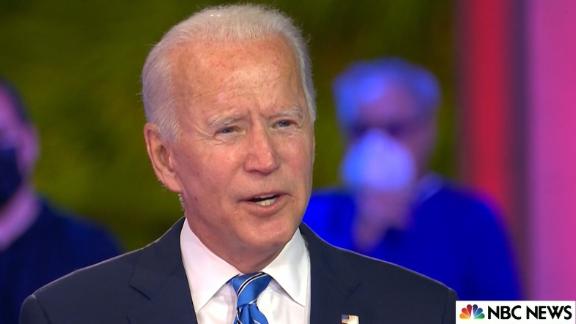 A little more than an hour after President Trump, infected with the coronavirus, made a rash and reckless return to the White House, Democratic challenger Joe Biden made clear at a televised NBC town hall why he is leading Trump in every national poll and in most top battleground states as well.

The leading issue in the November 3 election is the federal response to Covid-19. Biden has checkmated Trump on the issue.

Even as the President's close allies and advisers turn up sick after ignoring social distancing and mask-wearing best practices -- including his campaign manager, press secretary and three Republican senators -- Trump has chosen to double down on a failed strategy of downplaying the importance of the pandemic, tweeting, "Don't be afraid of Covid. Don't let it dominate your life."

Americans have seen the effects of the pandemic, which has killed more than 210,000 people, shut down entire school systems, triggered a global food crisis and resulted in the highest unemployment rates since the Great Depression. And they have the good sense to be afraid.

Trump's wildly irresponsible advice -- "don't let it dominate your life" -- plays right into Biden's strategy of offering the nation a calm, sensible and presidential alternative by simply acknowledging reality. At a time when the nation's leader seems lost in a fog of claims that he might be immune to the virus and unfounded predictions that the pandemic would simply disappear, Biden gets a big head start by following basic public health precautions and urging voters to do the same.

Thus, shortly after Trump ginned up a media spectacle of checking himself out of Walter Reed National Military Medical Center and posing, maskless, on a balcony overlooking the South Lawn of the White House, Biden was imploring voters to take the deadly pandemic seriously. "I hope nobody walks away thinking it's not a problem," he said of Trump's tweet. "It's a serious problem."

And when asked about Trump contracting Covid-19 after months of sowing confusion about the virus, Biden surely must have got heads nodding all over America by simply acknowledging the truth. "210,000 have died already. And the expectation is, if nothing changes, another 200,000 dead by the end of the year," he said. "That's 400,000 -- God forbid it that happens -- more than were killed in one year in America than four years in World War II."

NBC anchor Lester Holt, who hosted the event, said that Trump, like Biden, has been invited to talk with voters in a town hall, but the Trump campaign has not agreed to participate. That speaks volumes about what's likely to happen if Trump is well enough for the candidates meet for their next official debate, which will be a town hall.

Biden excels at the format, using jokes and personal anecdotes to connect with everyday voters. It's a world away from Trump's preferred campaign style of flying into a city and holding forth to hollering crowds at an arena or airport hangar.

Trump uses his speeches to lavish praise on himself, while Biden talks about his working-class upbringing and his wife's career as a public school teacher. Trump never misses an opportunity to slash at enemies -- Democrats, looters, immigrants, radicals -- while Biden talks hopefully about unifying the nation.

"The country is ready to be united, I believe," he told a voter at the town hall. "We have to just change the way we talk to each other. Politics has become so mean and so ugly. We've gotta get rid of that. We gotta just start talking to each other like we respect each other."

At a town hall, it won't be easy for Trump to interrupt and talk over voters, the way he did with Biden and the moderator in their first debate. Confronted with the real needs of ordinary Americans, Trump will be forced into the uncomfortable position of explaining why he has denied and denigrated scientific knowledge at every stage of the pandemic.

He'll also have to answer the question on everybody's mind: with hundreds of people dying every day, how can we trust you to keep the country safe from Covid when you couldn't even protect yourself from it?

Man arrested in Huntsville for sex abuse of a child, sodomy in 2017

Morgan County leads the state for per capita coronavirus cases