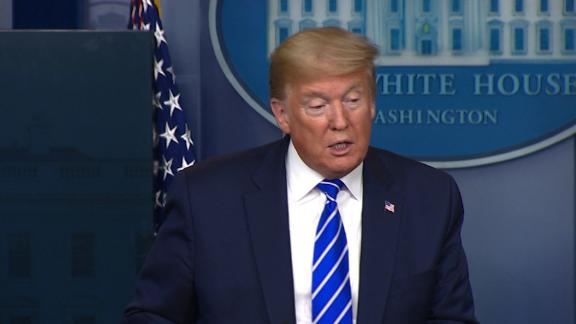 CNN's Dr. Sanjay Gupta and Anderson Cooper talk to Dr. Leana Wen about President Trump's comments regarding the use of ultraviolet light or injections of disinfectant to try to kill coronavirus

You don't need to be a doctor to know that it's dangerous to ingest or inject disinfectants. A random kid on the street could tell you that.

But on Thursday President Donald Trump advocated exploring just that. On live television. Four months into a pandemic that he has spectacularly mismanaged, leading to the highest death toll in the world.

It was so head-smackingly bad that the company that makes Lysol felt obliged to clean up the President's mess by issuing a statement, essentially dismissing the suggestion as lethal lunacy.

But this is who Trump is. This is how he thinks. He's not a very stable genius — he's self-evidently the opposite.

Some in the White House staff apparently can sleep at night by telling themselves it would be much worse if they weren't around. They may be right. But they remain complicit in supporting a President most of them must know is not competent.

Many of them constantly try to contain his worst instincts, abandoning alleged principles in the process. They contort themselves to play court politics, playing up to the President's family to shore up support. Their careers are hostage to his ego as they engage in absurd flattery, afraid that speaking the truth bluntly in public will cause them to lose their jobs -- after all, it's happened to some of their predecessors.

One of them, former acting White House chief of staff Mick Mulvaney — a one-time fiscal conservative who as director of the Office of Management and Budget presided over a massive explosion in spending, deficit and debt before the pandemic — showed that even ornate rationalizations of irrational behavior cannot save you.

In his new book "Front Row at the Trump Show," ABC News White House correspondent Jonathan Karl describes one instance in which Mulvaney reportedly recommended that his staff read a book called "A First-Rate Madness: Uncovering the Links Between Leadership and Mental Illness," by Dr. Nassir Ghaemi, the director of the mood disorders program at Tufts Medical Center.

"The new acting chief of staff seemed to be saying President Trump was mentally ill — and that this was a good thing," Karl recounts. "The corollary to that theory: Don't try to control the man in the Oval Office. What you think is madness is actually genius."

Apparently those closest to the President are trying to spin his alarming habits of mind as a positive good in order to navigate the daily strain of life in the Trump White House. They are spinning themselves.

This is why so much of the cleanup for the President's disinfectant remarks Thursday has abandoned anything resembling honesty. They're doing the best with what they've got to work with. So the new White House press secretary, Kayleigh McEnany, defaulted to blaming the media for reporting the President's comments, saying they lacked context.

The President himself then told reporters he was being sarcastic, which in this administration has become shorthand for something so terrible caught on tape that you have to pretend it was a joke. For the record, here's the full transcript of his remarks, courtesy of CNN's Daniel Dale.

The real problem is that words matter, especially when you're president. Perhaps that's why Google Trends showed a massive worldwide spike of searches for "inject with disinfectant." Press briefings aren't insult comedy stand-up or free association time — especially during a pandemic.

Indeed, there's a lot of controversy about whether the press should even cover the President's five o'clock follies — the daily pandemic press briefings that he uses as public ego stroking sessions in the absence of campaign rallies. But they do offer occasional scientific and medical insight from people like Dr. Anthony Fauci, director of National Institute of Allergy and Infectious Diseases, and Dr. Deborah Birx, the White House coronavirus task force coordinator.

President Trump's rambling digressions into misinformation also offers insight of a negative kind — real-time insights into his own disorganized mind. They reveal a person who is desperate for attention but determined to avoid responsibility, someone who kicks back at facts and anything resembling accountability. That's why we need Birx and Fauci to firmly push back on his most irresponsible ideas in public. Their credibility is essential to American's faith in our government's response. Sadly, Donald Trump is not.

The people being fooled are the President's self-described "strong supporters" — roughly one-third of Americans in the latest Washington Post/ABC News poll. They've been suckered into believing that Trump is far more capable and caring about people like them than he is. But as the President's team desperately tries to make Joe Biden's mental acuity a campaign issue, they're doing it with damaged goods that are on display nearly every day at dinnertime.

President Trump's comments about disinfectant are an indelible example of how unhinged and irresponsible he can be: What he said is something that everyone can understand. And people planning to pull the lever for the President will go to the polls knowing that he suggested that injecting disinfectant might potentially combat Covid-19 — when it would actually kill people.

More than 1.7 million gallons of sewage has spilled into Lake Guntersville

Building, buying or selling: The housing market in Huntsville is BOOMING

Alabama teen dies after being struck by lightning