The Iowa muddle isn't over, even now that the first results are in 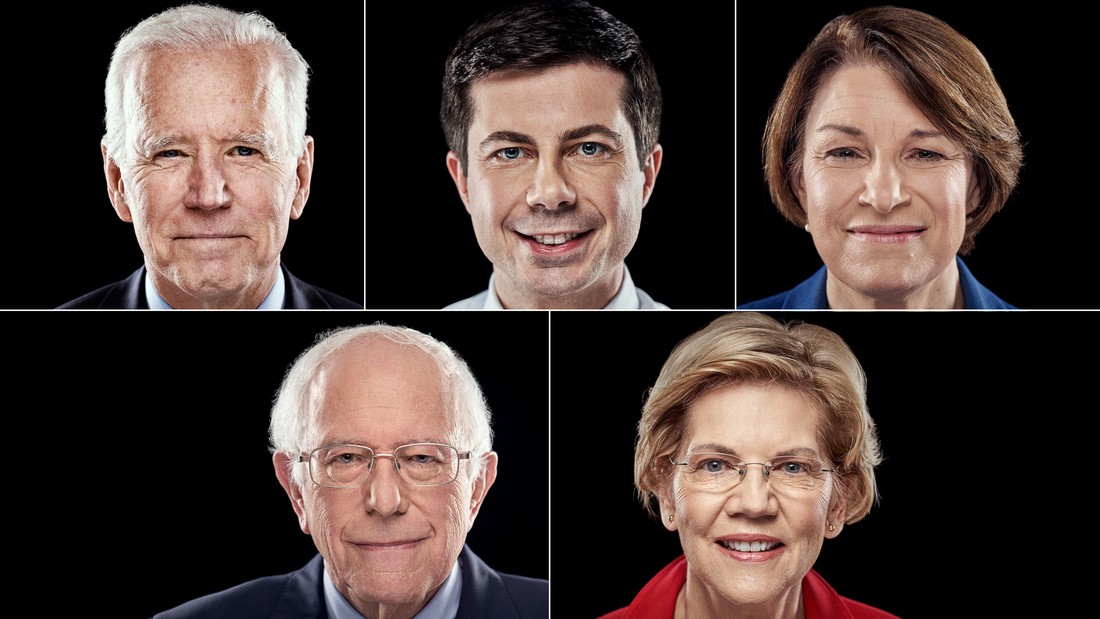 CNN's John King breaks down the latest results of the 2020 Democratic Iowa caucuses with 62% of precincts reporting.

The muddle was still the message even after the Iowa Democratic Party finally released partial results from Monday night's caucuses following an agonizing and unprecedented delay.

When the unfinished count eventually materialized Tuesday evening, it recorded a pileup at the top of the leader board between former South Bend, Indiana, Mayor Pete Buttigieg and Sen. Bernie Sanders of Vermont, and five candidates attracting double-digit support for the first time ever in the caucuses.

Visit CNN's Election Center for full coverage of the 2020 race

Even if the final numbers, or the order of finish among the candidates, shift somewhat when the last votes are released, one large point is already apparent: The candidates' convergence captures the reality of a Democratic Party balkanized by race, education, age and ideology -- and made clear that the leading candidates have not yet built coalitions big enough to transcend those divides or to pull away from their rivals. The Iowa Democratic Party's disastrously long delay in reporting results compounded the sense of confusion and haziness surrounding the outcome.

"Everyone has waited for the breakout star and none have emerged yet," says Matt Bennett, executive vice president for public affairs at the centrist Democratic group Third Way. "I don't think it's any great admission to make that we don't have a breakout star in this field. We just don't and it's evident."

The meltdown in reporting results made it extremely unlikely that the full momentum that has often followed a caucus victory would flow to any of the candidates, even Buttigieg and Sanders, who seem certain to finish one-two. Sen. Elizabeth Warren of Massachusetts, former Vice President Joe Biden and Sen. Amy Klobuchar of Minnesota, who finished well behind the leaders and relatively closely to one another in the partial results, all will likely benefit from the shift of media focus from the results to the breakdown of the reporting process -- and whether that will doom Iowa's already embattled first-in-the-nation status. That could be a reprieve above all for Biden, whose lackluster showing is bound to increase the anxiety of Democratic leaders over whether his campaign is strong enough to stop Sanders.

Most inconclusive results in decades

Yet even if the long delay denies the caucus its typical impact, the results may still be revealing, as much for what they don't show as what they do. The failure of any candidate to score a more decisive victory points toward a potentially long and grinding struggle for the party's nomination. The preliminary results of the entrance poll conducted by Edison Research for a consortium of news organizations that included CNN showed the leading candidates dividing up the party's key constituencies in a manner that highlighted each of the contenders' limitations at least as much as their strengths. Unless one of the top finishers can broaden his or her appeal in the coming weeks, Democrats may be headed for a springtime of uncertainty and discontent as all of the candidates struggle to span the party's differences.

When the first partial results were finally released, they pointed toward the most inconclusive Iowa outcome since at least 1976, when an uncommitted slate finished first, ahead of eventual nominee Jimmy Carter. If sustained through the final results, the roughly 27% of the state delegates that Buttigieg captured to lead the field would represent the lowest total for the top finisher since the Democratic caucuses began in 1972. In no previous caucus had voters divided to the point that five candidates reached double-digit support, as Buttigieg, Sanders, Warren, Biden and Klobuchar all did.

The preliminary entrance poll results pointed toward the same fragmentation. The survey showed Sanders, as in 2016, dominating among young voters and leading among those aged 30 to 44, but falling off sharply among those who were older. Buttigieg led among those 45 to 64, while Biden led solidly with seniors (though he, astonishingly, drew fewer than 1 in 20 voters younger than 45). Warren was generally stable across the age spectrum but weakest with the youngest voters, though that may be largely because Sanders monopolized so many of them.

Likewise, Sanders dominated among voters who described themselves as very liberal (followed by Warren), but he drew less than half as much support among those who identified as somewhat liberal and even less among moderates. Buttigieg led among the somewhat liberal group and he and Biden tied among the moderates, with Klobuchar close behind.

The candidates likewise separated along other key fault lines in the party: Buttigieg finished first among the roughly half of caucus attendees with college degrees, with Warren next (though only slightly ahead of the other three); but Sanders and Biden topped the results among the other half, without advanced education. Sanders led with men; Buttigieg with women.

In all, Buttigieg clearly displayed the most balanced support of the major contenders in Iowa, according to the entrance poll. But he managed that in a virtually all-white electorate: Both national and state polls still show him attracting minimal backing from African American voters and Latinos, who together will likely cast more than a third of all votes in the Democratic primaries this year.

While Biden's camp must be nervous about his showing, if the results hold, it can take some solace in the fact that he stayed relatively close to the others in a state where his best constituency -- African Americans -- represented less than 5% of the electorate, according to the entrance polls.

In all these ways, the results reinforced one of the dominant impressions from the last week of Iowa campaigning. Following the contenders across the state over the past few days, it was clear that each of the top-tier candidates is operating in a distinct niche, with less overlap among them than usual.

Biden's audience is middle-aged and middle of the road, loyal Democrats who loathe Trump but are looking more to restore civility and predictability in Washington than to upend it with the sort of "political revolution" that Sanders promises. Biden voters invariably stress his electability and his steadiness. Marti Elston, a retired social worker from Ames who came to see Biden during a recent stop there crystallized those sentiments when she told me, "I like Biden because he makes me feel calm, and I'm not feeling real calm and comforted right now."

Almost unanimously, the Biden voters I spoke with see Sanders as too extreme and question his loyalty to the party. Warren provokes the same ideological concerns, only to a slightly lesser extent. And while many say they have been impressed with Buttigieg's intelligence and fluency, it's common for them to say his time has not yet come -- even if his energy fans the doubts that even some Biden supporters hold about whether his time has passed.

"I wish Mayor Pete was 10 years older," Larry Jenkins, a retired salesman from Boone, told me before one Biden event, "or that Joe was 10 years younger."

In turn, almost all the Buttigieg and Warren supporters I spoke with said they considered Biden too old and conventional.

"I like Biden personally, but I just think maybe his time has come and gone," Donisue Rupp, an investment adviser, told me at a Warren rally in Des Moines.

Dave Graves, her colleague at an investment firm, was equally dismissive of Biden. "Every time I see him at those debates it seems like he is stumbling," he told me. "Everyone thinks he's a safe bet [against Trump] but I'm not sure he's that safe a bet."

Buttigieg and Warren occupy different poles of the Democrats' ideological debate, but in Iowa they appealed to an overlapping demographic constituency. Both of them generated enthusiastic crowds during the final days in white-collar suburbs around the state crowded with college-educated professionals drawn to their intellect and lucid presentations. It was easy to imagine many of their supporters in a Peloton ad.

Hele Spivack, an artist from Des Moines, had no trouble ticking off her reasons for supporting Buttigieg at a crowded rally for him late last week in Ankeny, a growing nearby suburb. "Why not?" she said. "He's young, he's energetic, he's the smartest one running. What else do we need to know? I think he's really a representation of what America needs to be."

Suzanne Lydon, an event planner from Des Moines, used very similar language to explain why she was backing Warren. "She's very thoughtful," Lydon told me. "She's done a tremendous amount of work to clarify her policy goals. She's done more work to back up those plans than a lot of other Democratic candidates."

It's probably not a surprise that most of the Buttigieg supporters I spoke with considered Sanders too extreme, but so did many of those at the events for Warren, who is much closer ideologically to the Vermont independent.

Lydon, for instance, says she's very uneasy about a possible Sanders nomination. "I would have a real hard time with that," she said. "I'm not a socialist."

Like Biden voters, Warren supporters admire Buttigieg, but would prefer a little more seasoning. "I don't know how you go from being mayor to being president," Paul Ebel, a Warren supporter in Iowa City, told me.

How Sanders' supporters stand out

More than any of the other candidates, Sanders operates in his own pool. His supporters tend to be younger, and more liberal, but also more alienated from both parties; they thundered in applause at his big rally last weekend in Cedar Rapids when he declared "we are taking on the entire political establishment, both the Republican establishment and the Democratic establishment."

A few nights earlier a Sanders audience in Des Moines enthusiastically joined Rep. Rashida Tlaib, a Michigan Democrat, in a chorus of boos for 2016 Democratic nominee Hillary Clinton. It seems guaranteed that the breakdown of the caucus process will only deepen the hostility and suspicion of Sanders' supporters toward the institutional Democratic Party.

One distinctive element at Sanders' rallies is the presence of a group of voters who are rare to see at events for any other Democratic candidate not only this year, but also in any recent campaign: young, white, non-college-educated men.

Tyler Dyson, who works at a pest control company; Cordell Gandy, a heating unit installer; and Shane, a grain inspector who did not wish to give his last name, all attended Sanders' rally Saturday night. All three had voted for him in the 2016 caucus and then voted for libertarian Gary Johnson in the general election because they did not like Clinton. Their passion for Sanders is undimmed four years later.

"He's for the average person, struggling every f---ing day," Gandy said. "The dude doesn't waver. He believes in what he stands for and he sticks to it."

All three said that this time they would vote for any Democrat over Trump, but they were as uninspired by Biden as they were by Clinton. "Clinton then is what Biden is now -- they feel like they are entitled to everyone's vote," Dyson told me.

Compared with Iowa, the electorate in the New Hampshire primary looming next week has usually been slightly younger and better educated and considerably more tilted toward independents.

In Iowa, the entrance poll found Sanders running away from his rivals among younger voters; Buttigieg, followed by Warren and Klobuchar, performing the best among those with college degrees; and Sanders strongest among independents, followed by Buttigieg.

One common thread is that none of those groups were very good for Biden, and now he must face a state with more of each of them. New Hampshire in recent years has often reversed the results of Iowa, but if it throws a lifeline to the struggling former vice president, that might represent the Granite State's most surprising Iowa reversal yet.