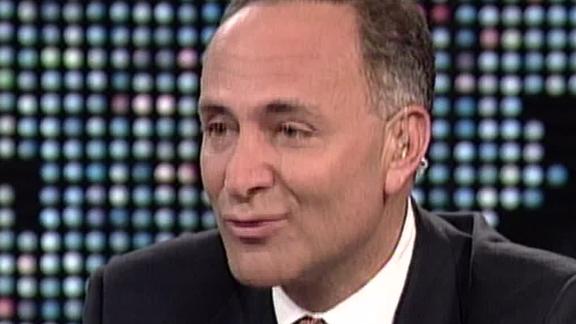 Senate Democratic Leader Chuck Schumer has blasted his Republican counterpart Mitch McConnell after he described himself as "not an impartial juror" ahead of President Donald Trump's Senate impeachment trial, but Schumer himself repeatedly expressed similar sentiments in the late 1990s when senators weighed the removal of President Bill Clinton.

Senate Democratic Leader Chuck Schumer has blasted his Republican counterpart Mitch McConnell in recent days after he described himself as "not an impartial juror" ahead of President Donald Trump's Senate impeachment trial, but Schumer himself repeatedly expressed similar sentiments in the late 1990s when senators weighed the removal of President Bill Clinton.

Schumer's past comments are the latest example of how lawmakers on both sides of the aisle are having to confront their prior positions on impeachment that appear to conflict with their present-day statements.

In recent days, Schumer has slammed McConnell ahead of Trump's trial, saing he was "utterly amazed" by McConnell describing himself as not impartial.

"Let the American people hear it loud and clear, the Republican leader said, proudly, 'I'm not an impartial juror. I'm not impartial about this at all.' That is an astonishing admission of partisanship," Schumer said in a floor speech.

But in several appearances on television in 1998 and 1999 reviewed by CNN's KFile, Schumer noted that senators had previously formed opinions heading into the trial and that the Senate was "not like a jury box." Schumer was elected to the Senate in 1998 after saying during his campaign that a vote for him would be a vote to not impeach Clinton.

A spokesman for Schumer told CNN in an email on Friday that his statements came after the conclusion of the Starr investigation.

"These quotes all came after the Starr investigation, which included testimony from key witnesses including President Clinton, had concluded and been made public for months and as Sen. Schumer was in the anomalous position of having already voted on impeachment in both the House Judiciary Committee and on the House floor," his spokesman said. "As is reflected in these quotes, Schumer believed then and still believes now that all of the facts must be allowed to come out and then a decision can be made -- in stark contrast to the Republicans today in both the House and Senate who have worked to prevent all the facts and evidence from coming out."

"It's quite different than a jury"

Speaking on CNN's "Larry King Live" in January 1999, Schumer said the trial in the Senate was not like a jury box.

"We have a pre-opinion," Schumer said, citing himself and two newly-elected Republican senators who had voted on impeachment in 1998 as members of the House of Representatives who said they would vote in the Senate. "This is not a criminal trial, but this is something that the Founding Fathers decided to put in a body that was susceptible to the whims of politics."

"So therefore, anybody taking an oath tomorrow can have a pre-opinion; it's not a jury box," King asked Schumer.

"Many do," Schumer responded. "And then they change. In fact, it's also not like a jury box in the sense that people will call us and lobby us. You don't have jurors called and lobbied and things like that. I mean, it's quite different than a jury. And we're also the judge."

A day later, the Republican National Committee attacked Schumer in a press release for previous comments in the House saying there was no basis for impeachment.

"No self-respecting jury would allow somebody who's already formed an opinion on the guilt or innocence of the accused," then-RNC Chairman Jim Nicholson said, "but Chuck Schumer has loudly proclaimed that he's pre-judged the case. He's already announced that he's decided the President shouldn't be impeached, much less removed from office."

"The Republican National Committee put out a statement saying that you were a House member on the Judiciary Committee, you announced that you would not impeach the president of the United States," host Tim Russert asked. "That therefore, you are not an impartial juror in the Senate and should recuse yourself."

Schumer responded the Senate was not like a judicial body.

"Right," Schumer said. "Well, first, I found it curious that three of us had to take positions because of our positions in the House: then-Congressman Bunning, Congressman Crapo and myself. They criticized me without mentioning the other two, who also took a position. But let's remember this, Tim: The Founding Fathers -- whose wisdom just knocks my socks off every day, it really does -- set this process up to be in the Senate, not at the Supreme Court, not in some judicial body."

"Every day, for instance, hundreds of people call us up and lobby us on one side and the other. You can't do that with a juror," he added. "The standard is different. It's supposed to be a little bit judicial and a little bit legislative-political. That's how it's been."

During his race for the Senate in 1998, Schumer campaigned against impeaching Clinton and attacked his Republican opponent, Sen. Al D'Amato, for not taking a position on the issue.

D'Amato had said it would be "inappropriate" to weigh in because senators "may be called upon to act as a jury." The issue of impeachment was a frequent topic at a series of debates between the pair.

"I came to the conclusion that it didn't rise to the high crimes and misdemeanors standard and that there shouldn't be impeachment," Schumer said in one debate with D'Amato. "Now the voters know of my view. I've made it public, unlike the senator. And I will, they can judge me on that."

"To suggest that I should take your position now before the facts have ever been presented to us, absolutely would be improper. It would be wrong," responded D'Amato.

"Every New Yorker knows where I stand on that issue, which I think is an important thing for them to know before they vote for one of us," Schumer said in another debate. "Now what about Senator D'Amato? Can you trust what he says on this issue, even if he were to say it?"

"Senator D'Amato is the only person in America with no opinion on the matter," added Schumer. "He should tell New Yorkers where he stands because his past actions show we cannot trust him to do what is fair instead of doing what is partisan. How can we trust Senator D'Amato to do the right thing on impeachment when he doesn't tell us how he feels and when time and time again he doesn't tell us the truth?"

At the time of the vote to remove Clinton, Schumer announced in a Newsday op-ed that he would be voting to acquit.

Schumer said he made up his mind in September 1998, when in the midst of his campaign for Senate, he voted against proceeding with impeachment as a member of the House Judiciary Committee.

"My decision will not come as a surprise," Schumer wrote. "I will be voting to acquit the president on both counts. I had to make my decision in September as a member of the Judiciary Committee in the House, and while I was in the middle of the campaign."