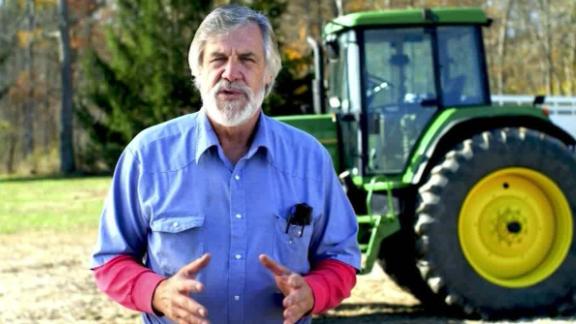 Christopher Gibbs, a farmer and former GOP official in Ohio, is now mulling a run against one of President Trump's fiercest defenders, Rep. Jim Jordan (R-OH).

Gibbs, a former local Republican official, voted for Trump in 2016. But he became an outspoken critic of the President's trade policies and has declared his independence from the GOP.

"People are just literally tired of that," added Gibbs, who raises cattle and grows soybeans, alfalfa and corn.

Jordan, whom Republicans added to the House Intelligence Committee specifically for its impeachment probe, was a consistently vocal defender of the President during two weeks of public hearings in the inquiry.

It's not just Trump's trade war with China that upsets Gibbs. He's also criticized the President for pulling out of the Trans-Pacific Partnership and for putting tariffs on foreign steel and aluminum, which he said raised the cost of things like tractors, grain bins and fencing.

Farmers are an important demographic for Trump in the 2020 election and the President has often called them "patriots" for making sacrifices while he negotiates with Beijing for a larger trade deal.

In an earlier appearance on CNN in May, Gibbs took issue with that characterization.

"To me, that's just a design to make me continue to be quiet. And I'm not going to be quiet," he said at the time.

Gibbs said his interest in jumping into the race is about more than Trump's agricultural policies and defeating Jordan.

"This is bigger than that," Gibbs said Monday.

"The disruptive nature of populism is corrupting both of these parties," he added.

If Gibbs decides to enter the 2020 race, he'll be facing an uphill battle. Jordan won with more than 65% of the vote in his last election.

But it's possible Gibbs could capitalize on the attention Jordan has garnered during the House impeachment hearings this month.

Cobb said on Twitter that she raised more than $1 million after a moment between Stefanik and Democratic House Intelligence Committee Chairman Adam Schiff went viral, though the moment has raised Stefanik's profile, too.