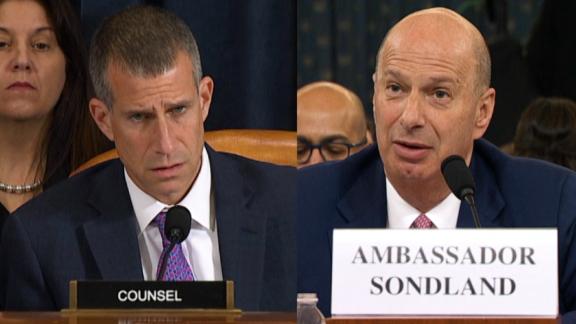 During an exchange with Steve Castor, counsel for House Republicans, US Ambassador to the European Union Gordon Sondland testified that it was his understanding President Trump's personal attorney Rudy Giuliani made demands that came from Trump.

The John Dean moment in this impeachment inquiry has arrived -- President Donald Trump's abuse of power has been confirmed by a witness with direct involvement in the scheme.

Dean, we remember, was the White House lawyer and aide whose testimony before Congress revealed during the Watergate hearings in 1973 that President Richard Nixon knew all about crimes committed against his political opponents and covered them up. It was Dean who told Nixon, "We have a cancer within, close to the presidency, that's growing."

Forty-five years after Dean spoke, EU Ambassador Gordon Sondland, testifying to the House Intelligence Committee on Wednesday, confirmed that Trump and his out-of-control personal lawyer Rudy Giuliani extorted Ukraine in a scheme to smear a political rival and rewrite the history of the 2016 election (a charge both men have denied).

Calm, sober, and direct in a way Trump has never been in his public appearances, Sondland said, "We followed the President's orders" as he worked with Giuliani on a "quid pro quo" that required Ukrainian President Volodymyr Zelensky to do certain favors before his country would receive promised aid for its war against Russia and its proxies. Thousands have died since Russia backed the start of the war and Ukraine desperately needed the nearly $400 million in weaponry that Congress had approved and the Pentagon had determined should be sent.

As Sondland confirmed in his statements, Trump and Giuliani wanted Zelensky to announce investigations into former Vice President Joe Biden's family and into a debunked conspiracy theory about Ukrainians somehow waging an influence war on the 2016 election.

The world knows that Russia was the source of a massive disinformation effort intended to tip the 2016 election in Trump's favor. Confirmed unanimously by US intelligence officials, the Russian plot put a stain on Trump's narrow victory, which he was obviously seeking to remove by shifting the blame to Ukraine.

It's not hard to imagine the excitement Trump and Giuliani could have felt as they pulled the strings. Biden was the leading contender among Democrats running for president. His son Hunter had served on the board of a Ukrainian firm called Burisma, which the two men wanted Zelensky to target for investigation. If, as they asked, Zelensky had announced that Burisma and the 2016 election would be scrutinized, President Trump's 2020 reelection drive would be served.

According to Sondland, who echoed others who have appeared before the House Intelligence Committee, Giuliani pursued a blunt effort of increasing pressure on Zelensky. In response to a question from committee chairman Adam Schiff, Sondland said that "more and more conditions were being placed" on the plan for Zelensky to be granted a visit to the White House to meet with Trump. Such a meeting was of great importance, as it would signal to Russia that America remained a reliable ally to Ukraine.

"Everyone was in the loop," said Sondland as he explained that he had informed administration officials from Secretary of State Mike Pompeo to Chief of Staff Mick Mulvaney about Zelensky's plan to give in to the pressure.

Sondland, in both his own recollections and confirmation of testimony from others, described a President committed to his own political interests and disinterested in normal policy. Sondland said Trump expressed no concern for an ally at war and had a firm commitment to the bizarre idea that a company called Crowdstrike operated a computer server in Ukraine that was the key to the chaos of the 2016 US election. The idea has no currency outside extreme right wing media and no real proof of it has surfaced anywhere.

With his testimony, Sondland portrayed the Trump-Giuliani scheme as constructed out of lies and fantasies and characterized the schemers to be aggressive, abusive and heedless of the damage they were doing to both the United States and Ukraine. As the military aid was delayed, battles raged and soldiers died. As Trump and Giuliani devoted themselves to undermining US intelligence agencies with their promotion of a conspiracy theory, they presented an American face to the world that is no better than a raving drunk in a barstool debate. To them, facts don't matter. Reality is secondary. And if you don't agree, something bad will happen. As Trump darkly said to Zelensky of then-Ambassador Marie Yovanovitch, "She's going to go through some things."

Sondland's testimony rings true to anyone who knows the Trump record, both before and after his election. Manipulative and deceptive, Trump is renowned for his lies and for a commitment to them that seems profoundly self-destructive. In the past all he risked was his business, which was built in his name. That name now lies in ruins. As president, he risked America's well-being and its standing in the world. Both have taken a beating in the Trump era. The recovery may well have started on Wednesday with Sondland's John Dean moment.

Huntsville police: $420,000 worth of drugs seized this week

Madison restaurant among 4 competing for best pizza in Alabama

The Cheesecake Factory coming to Huntsville