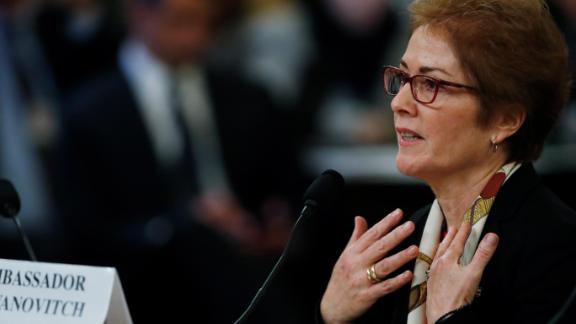 Former US Ambassador to Ukraine Marie Yovanovitch testified during the public impeachment hearing of President Donald Trump that Trump's Twitter attacks against her are "very intimidating."

If we could remove partisan blinders, all Americans would see former Ambassador Marie Yovanovitch as the national hero she is. Her testimony before the House committee investigating President Donald Trump showed a public servant who has devoted her life, at great personal risk, to bolstering the nation that gave refuge to her parents after they fled the Nazis and the Bolsheviks.

She radiated the same dedication to freedom that seeps into the DNA of those who have fled oppression or seen it up close.

That's why her story was not just inspiring but also dispiriting. An American hero, attacked by an American president -- removed from her post not because she failed to do her job but because she was doing it too well. As a result of Trump's actions, US policy went from supporting anti-corruption efforts to combating them. And for whose benefit?

Yovanovitch's testimony was powerful, credible and moving. If Trump's defenders could raise a periscope and see the world outside their submerged world of loyalty to their master, they would see that a patriotic American is raising the alarm. The country is in danger. What happened in Ukraine is but a sample of the damage this president has done to America's security and to its standing in the world.

Yovanovitch was poignant in her prepared opening remarks, asking, "How could our system fail like this? How is it that foreign corrupt interests could manipulate our government?"

Foreign interests, she said, are twisting American policy. The beneficiary is Russian President Vladimir Putin and autocrats like him. "Which country's interests are served when the very corrupt behavior we have been criticizing is allowed to prevail? Such conduct undermines the US, exposes our friends, and widens the playing field for autocrats like President Putin."

Yovanovitch was carrying out the crucial anti-corruption mission set out by the United States, not by Republicans, not by Democrats. Helping Ukraine's young new president uproot endemic corruption was a key part of an effort to help the country escape Russia's demand that it stay within Moscow's orbit. She explained that helping Ukraine free itself from Russian domination is crucial, partly because if Ukraine fails then Russia will seek to expand further.

She was doing a stellar job of advancing US interests, and the team now being known as the "Three Amigos" intervened. Former Energy Secretary Rick Perry, Ambassador to the European Union Gordon Sondland and Ukraine envoy Kurt Volker were reportedly working with Trump's point man on Ukraine and personal lawyer Rudy Giuliani to upend Washington's policy toward Ukraine. The new plan was to have President Volodymyr Zelensky announce investigations into the work of Joe Biden's son, Hunter Biden, with the firm Burisma, as well as into conspiracy theories claiming it was Ukraine rather than Russia that interfered in the 2016 US election.

She was in their way because she was pursuing the interests of the United States -- which coincided with the well-being of Ukraine -- rather than working to help undermine Trump's possible 2020 opponent.

President Donald Trump's defenders are asking Americans to suspend disbelief and accept an explanation for his actions on Ukraine that runs against all we have seen during his presidency. They want the people to accept a new character, action-movie superhero "Donald Trump: Corruption Fighter."

They shouldn't bother fitting the President for a cape. The record shows that Trump has never had any interest whatsoever in combating corruption, at home or abroad. Quite the contrary.

Trump's backers claim his demands that Ukraine announce an investigation of his top political rival Joe Biden, was driven by the President's anti-corruption zeal. Set aside the fact that Biden's involvement in Ukraine was part of a legitimate international push to help Ukraine fight corruption.

Instead, look at Trump's own record. When has he ever, until now, spoken out against corruption in any other country? Trump has a track record of embracing autocrats and completely disregarding their efforts to dismantle checks on corruption in their countries.

As early as 2016 Trump shocked observers by hiring Paul Manafort, a man who had enriched himself helping tyrants and thieves stay in power around the world, to chair the Trump presidential campaign team.

His first national security adviser, Michael Flynn, was getting hundreds of thousands of dollars from Turkey even as he was advising the Trump campaign.

Giuliani has been working with known scammers as they pursued the President's goals, which included pushing out Ambassador Yovanovitch, who was leading the US charge against corruption in Ukraine.

This wasn't just money to help another country. Its purpose was to subvert US policy; to put the national interests of another country above those of the United States.

Trump hasn't just not fought corruption, he has gone a long way toward trying to turn the United States into a kleptocracy.

He and his administration may just be the most corrupt in the country's history. It's hard to keep up with the scandals (all of which Trump denies and dodges responsibility for). Just this week CNN saw the brochure for the sale of the Trump Hotel in Washington, seeking to boost the sales price by touting of the potential to "capitalize on the government related business."

A few weeks ago, Trump had to cancel a brazen plan to force world powers to pay him by staying at his Doral resort in Miami when the US hosts the G7 summit. Shortly before that we learned that the Air Force has been directing crews to stay at Trump's resort in Scotland, racking up hundreds of overnight stays at Trump's property, thus putting more taxpayers' money in the President's pockets.

The list of people hired by Trump who have had to resign for malfeasance is endless.

No, Trump does not care about corruption, not in Ukraine, not anywhere else. His defenders are telling you once again to ignore your lying eyes and believe their far-fetched effort to justify the President. Yovanovitch is telling us that American foreign policy is in danger; that the State Department is in crisis. That there's much more at stake for America now than what happens in Ukraine.

US Marshals arrest man for murder of Florence woman

Huntsville Hospital will soon give 2,500 new coronavirus vaccines each week