Pilot killed when plane crashes at air show in Florida 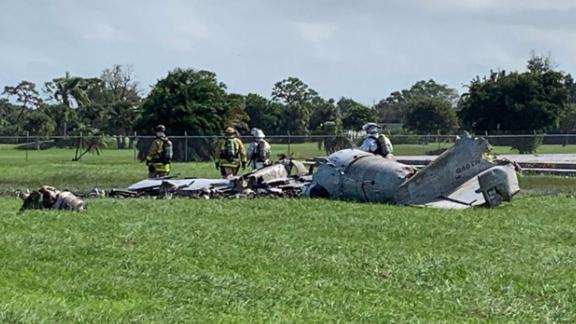 The male pilot was the only person aboard and no one on the ground was injured, the sheriff said.

Snyder's office tweeted a photo of the turboprop plane and emergency responders. The airplane was part of the Stuart Air Show in Stuart, Florida.

"There's nothing anyone could have done (to save the pilot)," the sheriff said, adding that fire and rescue personnel were at the crash site "within moments."

CNN is reaching out to authorities for information about the pilot.

The Federal Aviation Administration said the Grumman OV-1 Mohawk crashed at Witham Field at around 1:15 p.m. ET. The OV-1 is a two-seat, twin-engine reconnaissance aircraft built by Grumman for the U.S. Army and flown during the Vietnam War era.

On the Stuart Air Show Facebook page, officials wrote: "We've had an incident involving one of our aircraft. All local and federal agencies are on site and investigating so that we may ensure the safety of our airshow before we continue."