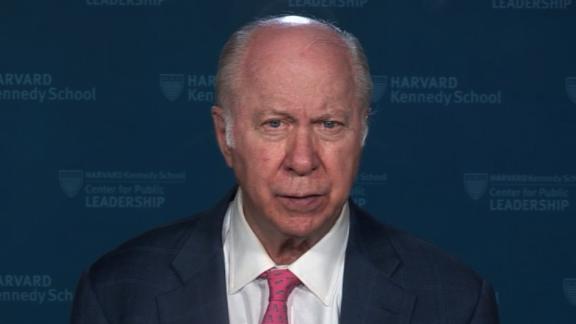 Headed to Amsterdam? Prepare to pay up. The Dutch capital will soon have the highest tourist tax in Europe.

Here's what else you need to know to Get Up to Speed and Out the Door. (You can also get "5 Things You Need to Know Today" delivered to your inbox daily. Sign up here.)

An agreement has been reached to have the anonymous whistleblower who filed a complaint against President Trump testify before the House Intelligence Committee. But just when that will happen is still up in the air. Committee chair Adam Schiff says protecting the whistleblower's identity is a primary concern. Trump tweeted up a storm about the whistleblower over the weekend, saying he deserves to "meet my accuser." The President's escalating threats prompted lawyers representing the whistleblower to send letters to Acting Director of National Intelligence Joseph Maguire, expressing concerns for the person's safety.

Saudi Arabia's Crown Prince Mohammed bin Salman said he didn't order the October 2018 killing of Washington Post columnist Jamal Khashoggi. Bin Salman, in an interview on CBS's "60 Minutes," said he took full responsibility for it though, since the killing was carried out by people working for the Saudi government. The CIA concluded that bin Salman did indeed personally order Khashoggi's murder. Khashoggi was killed and dismembered after entering the Saudi consulate in Istanbul, Turkey.

The 17th consecutive weekend of anti-government protests in Hong Kong was one of the most violent. Protesters hurled Molotov cocktails, tossed bricks and lit fires. Police responded with tear gas, a live warning shot and a water cannon that fired blue dye (used to stain protesters to make them easier to identity later). The violence comes right before the 70th anniversary of the founding of the People's Republic of China, when Beijing hopes to project an image of national strength and unity with huge military parade.

The death of a trailblazing sheriff's deputy in Harris County, Texas, is being felt worldwide. Sandeep Singh Dhaliwal was shot and killed during a traffic stop Friday. He was an observant Sikh who years ago gained national attention when he got permission to wear a turban as part of his Harris County Sheriff's Office uniform. Now the Sikh community in Houston and around the world is mourning his loss. Thousands of people are expected to gather at a basketball arena in Houston later this week to honor his life.

It's not October yet but Montana is already covered with almost two feet of snow. A winter storm is still blowing through the state and other parts of the Rockies. A winter-storm warning will be in effect for portions of north-central Montana through this morning. In addition to the snow, there are reports of downed trees and power lines. Snow in September in this part of the country isn't all that uncommon, but the amount of snow is unusual for this time of the year. Meanwhile, way out in the Atlantic, Hurricane Lorenzo is churning through the ocean as a Category 3 storm. Lorenzo briefly was a powerful Category 5 storm over the weekend before it weakened. It's the strongest hurricane recorded so far north and east in the Atlantic basin. Lorenzo is expected to pass over the Azores islands in a few days.

People are talking about these. Read up. Join in.

So is it still a 'gas' station?

Fill 'er up, at the first gas station in the United States that's fully electric.

Greta Thunberg isn't fighting to save the environment alone. Meet five other teen activists who are working to solve the climate crisis.

Thank you for your service

At his show in Pittsburgh over the weekend, country crooner Toby Keith gave a wounded Marine a very special gift.

NUMBER OF THE DAY

QUOTE OF THE DAY

"He loved my daughter beyond unconditionally. And he gave it all for her to live."

Brendon Osteen, talking about his father, Don Osteen. The elder Osteen, a Purple Heart recipient, sacrificed his life to save his 3-year-old granddaughter.

You have to get your own