San Francisco neighbors erect boulders to keep the homeless away 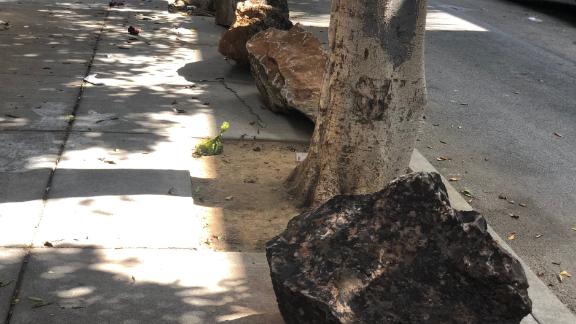 A group of San Francisco neighbors sought out a solution to deter drug dealers and the homeless from staying on their street. CNN affiliate KGO's Luz Pena reports.

A group of San Francisco neighbors came up with their own solution after they said the city wouldn't help them with the local homeless and drug dealer population, according to CNN affiliate KGO: They put boulders on the sidewalks.

The group has been going to city meetings and filing reports with the city for six months, according to KGO, but they haven't had any luck.

After a turf war one night, one of the residents told KGO the neighbors had had enough.

"It got to the point where everybody was just done," the person told KGO. "People had knives and guns and people were out fighting, carrying on and waking up people in the neighborhood."

Asking not to be identified, that resident told KGO a group of neighbors pitched in to buy 24 boulders that are now placed on their sidewalk to discourage the homeless from pitching tents.

It's well known that housing costs in the Bay Area are significantly higher than most cities in the United States, and the homeless population in the city is growing fast, according to a recent study by Zillow.

Last Wednesday, President Donald Trump escalated his political fight with California by threatening to have the Environmental Protection Agency pursue action against San Francisco for its homelessness problem.

Through Facebook, the neighbors organized and raised more than $2,000 for the boulders, according to KGO.

"I don't know if it's a long-term solution, but at least in the short term, they seems to be working in keeping the tents off the sidewalk," Lisa McEachron, who works in the area, told CNN.

Another neighbor who did not want to be identified told CNN they like the boulders.

"They really need to be there," the neighbor said. "They have helped."

Danielle, who said she wasn't comfortable sharing her last name, lives a few blocks away and walks the area daily. She told CNN she thinks the neighbors could have focused their efforts on fighting for housing or on calls to city officials.

"I know the reality of homelessness and moving people from one sidewalk to another doesn't solve it," she said. "It's as if the people who are for them have the attitude, 'We want to be privileged' not to deal with problem."

The City of San Francisco doesn't plan on removing the boulders. In fact, city spokeswoman Rachel Gordon told CNN officials are looking for ways to sanction them so they can remain in place.

CNN reached out to San Francisco's Coalition for Homelessness but has not heard back.