Where to live your best 'Downton Abbey' life 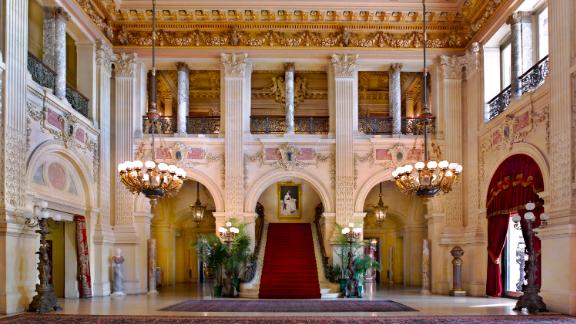 "Downton Abbey" characters are likely to drop in at Newport, Rhode Island, summer "cottages." Some of these Gilded Age megamansions are still open for tours today.

The sun is shining, the lawns of "Downton Abbey" are emerald green, and the Crawley family has come out to greet the Lady Hexham, the former Lady Edith Crawley, driving up in her shiny new car with husband and daughter in tow.

"No maid, no valet, no nanny, even!" exclaims Lord Grantham, played by Hugh Bonneville.

It's a new day at "Downton" and the King and Queen are coming for a visit.

"Downton Abbey" the movie topped the United Kingdom's box office last weekend, netting more than $7.5 million in the UK in its first week of release. Advanced ticket sales show it may also drive in fans when it opens Friday, September 20, in the United States.

"Downton" ended four years ago on the small screen, but its charm has never really gone away. Apart from dutifully binge re-watching reruns, "Downton" lovers have been satiating themselves with a plethora of books, fan pages and Facebook groups.

For the traveler, there have been European tours playing off the series; visits to the UK's Highclere Castle, grown ever more popular since its starring role as the real-life estate that is "Downton Abbey" on the show; and a traveling Downton-themed exhibition soon to appear at the Vanderbilt-owned Biltmore Estate in North Carolina.

"I think a reason people like shows like 'Downton Abbey' is that it reminds us that civility and being kind and being polite actually has a lot of benefit," said Trudy Coxe, CEO of the Preservation Society of Newport County, an area in Rhode Island where American aristocracy built estates of their own. "Maybe it's the lifestyle that we can never bring back, or maybe we can, if we work at it a little bit."

If you'd like some real life "Downton Abbey" inspiration, here are some of our favorite options:

The mansions of Newport, Rhode Island

At a party during Downton's Season 4, the titled but broke British Lord Aysgarth asks the exceedingly rich American widow Martha Levinson, mother to Lady Grantham, if she's ever been to the summer getaway made famous by the Americans during the second industrial revolution.

"As a matter of fact, I'm in Newport quite a lot," answers Levinson, played by the indomitable Shirley Maclaine. "I have, what they call, a cottage on Belleview Avenue."

Anyone who was anyone in American society had a mega-house in Newport, and her character in real life was likely sipping tea with the Astors and the Vanderbilts at their summer vacation homes.

The massive marbled mansions were a proclamation to the world, according to John Rodman, Director of Museum Experience for the Preservation Society of Newport County.

"They were demonstrating to the Europeans that, well, frankly, whatever you can do, we can do better," Rodman said. "Of course, the Europeans just wanted to think of us Americans as bumpkins."

Tour Alva Vanderbilt Belmont's Marble House, where she organized for women's rights, and the Elms, which was the setting of a major labor strike, ending dramatically when the entire staff was fired.

There are rooms with floor-to-ceiling walls refurbished with golden velvet, and palatial ballrooms and plush green lawns which set the scene for million-dollar parties. These mansions bring history to life.

Here, too, is the tension that threads its way throughout "Downton Abbey" -- a society trying desperately to preserve its way of life, while figuring out how to make its way into the future.

Downton Abbey at the Biltmore

Mrs. Patmore's kitchen table was the setting of many a tussle between cook and maid, butler and housekeeper, lover and not-so-much-a-lover. It is also much like the force of nature, Mrs. Patmore, that lords over it; the table is fairly short. It was built this way to better film the actress Lesley Nicol who played her onscreen.

You'll learn this backstage secret and more at the feature-packed "Downton Abbey: The Exhibition."

After an extended debut in New York City, and a stop in Florida, it is now in Boston until September 29. It moves to America's largest private home, the Biltmore estate in Asheville, North Carolina on November 8. It may arrive just in time to catch the estate with its burnished fall leaves, but it will certainly be around when the stately house is decked out in lights for the holidays.

"Travel certainly opens up your world-vision by visiting estates like Biltmore," said Marissa Jamison, a Biltmore spokeswoman. "And our guests gain a greater understanding of a certain time and place in history."

There are over 50 costumes from the show on display, some so close you can count the threads. See the shocking green dress Lady Edith wore on her unaccompanied date with Michael Gregson, and then learn why ladies changed their outfits so many, many times.

Other sets, trinkets and decorations from the show are mixed in with multimedia elements where characters spring to life as soon as you get close. The exhibition is included in the cost of your admission ticket, which means you can live your "Downton Abbey" fantasy all while getting a bit of the real life story behind the building of Biltmore. The story of how they tried to keep bacteria from growing in the indoor pool before the days of chlorine is particularly fun.

A Viking cruise with a Downton Abbey end

Viking River Cruises, a longtime sponsor of Masterpiece on PBS, which aired "Downton Abbey" in the United States, has organized a post-cruise, five-day extension based on the series.

On the "Great Homes, Gardens & Gin extension," you can imagine the black-tie suited men of "Downton Abbey" while on your Highclere stop in Hampshire. (Then imagine Ross Poldark, the lead character of the sultry hit series "Poldark," in all his unsuited, hairy-chested glory while visiting Chavenage House in the Cotswolds.)

You never have to wake from your leading-man dreams as the tour also includes the setting of "Wolf Hall" on a visit to Broughton Castle. It's the family home of the Fiennes family, and the acting brothers Joseph and Ralph Fiennes are the owners' cousins. (The home also appeared in "Shakespeare in Love.")

If you're serving yourself from a pot of tea and then carefully passing to the next person to serve themselves, you're doing it wrong.

One person is the designated "tea pourer." A lesson like this will serve you well in life, if you're trying to live your life the "Downton Abbey" way. Learn the secrets of proper tea etiquette and more while on a 10-day tour.

The luxury travel company Zicasso has created an itinerary to fill in all the details of just how a "Downton"-era character would have spent their day.

The company's founders are huge fans of the show, and already have several tours inspired by the series. The "Downton Abbey Movie Tour" was inspired when the operators imagined the Crawley family's life as they prepared for their royal visit.

The 10-day tour includes places highlighted in the movie, such as London and Windsor, Hampshire and Yorkshire. It also, of course, will include a visit to Highclere Castle. Get your own private cooking class and learn what may have gone into Mrs. Patmore's recipes, and then try your hand at a skeet shooting lesson.

"It is one thing to see the villages and venues where the production was filmed, but quite another to spend a "day-in-the-life" of the characters of the film both real and imagined," said Brian Tan, Zicasso CEO and founder.

Pricing starts at around $3,995 per person, and the itinerary is customizable.

All of the things are happening at Highclere

If a castle could win an Oscar, one would surely go to Highclere Castle. The estate that is the real-life "Downton Abbey" truly was converted into a hospital during World War I, and was also the site of multiple plane crashes during World War II.

The Countess of Carnarvon, who runs the estate with her husband, the Earl, is a dedicated historian, and she has just added another book to her credit available for order now, "Christmas at Highclere: Recipes and Traditions for the Real Downton Abbey."

An increase in visitors means advance tickets often sell out. Castle administrators remind visitors that there are still a number of day-of tickets on offer (afternoon tea, however, is best booked in advance). Pay attention to the opening days, as they are closed Fridays and Saturdays in summer.

You'll find all of this information and more on their website, which is the best tool of all to get the most of your visit. Highclere often runs special promotions announced on the site, like a once-in-a-lifetime night's stay bookable by Airbnb, and a Christmas Tour & Afternoon Tea, where you and a limited number of guests can nibble on sandwiches and take in the castle festooned in garland and twinkling lights.

Regular admission to the castle and gardens begins at £17 for adults.