Katy Perry explains why she ended her feud with Taylor Swift 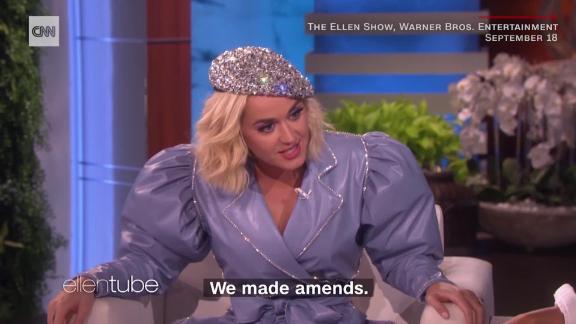 Katy Perry shared on The Ellen Show why she and fellow pop star Taylor Swift ended their feud.

They did it for their fans.

Katy Perry and Taylor Swift ended their feud -- which Perry now calls a "misunderstanding -- because of the young girls who look up to them.

The "Small Talk" singer appeared on "Ellen" Wednesday to perform the single and sounded mature while talking about her former rival.

"We have such big groups of people who like to follow us," Perry said, "and so they kinda started turning against each other a little bit, too, and it was really unfortunate."

Perry continued, "I'm all about redemption and forgiveness and for setting an example for those younger people, that it can be cool to ask for forgiveness, and confront someone that you may have an issue with or a problem with and talk it out."

Perry explained that while Swift was on her "Reputation Tour," she sent her a literal olive branch, then would say hello to Swift and be kind whenever she saw her in public.

The former foes then got together to bake cookies and talk, and decided that since "10 people in the world have as much in common as we do," that they should get along.

We can even call them friends.

They publicly showed everyone they buried the hatchet over the summer when Perry played a burger to Swift's fries in Swift's music video for "You Need to Calm Down."