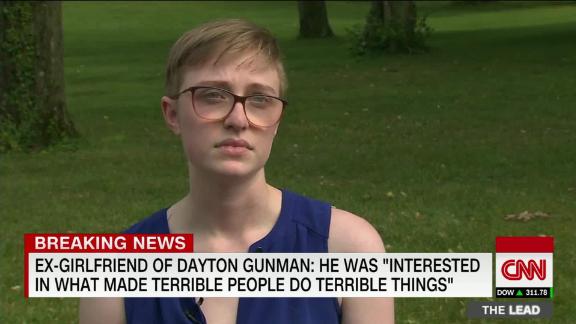 Adelia Johnson says she bonded with Ohio gunman Connor Betts over their experiences with mental illness. But she said it's wrong to pin the massacre solely on his condition.

The two began dating after meeting in January in a social psychology class at Ohio's Sinclair Community College, she said.

Betts was "fascinated" by current events and tragedies, including mass shootings, she said. At the time, she said, nothing about his interests gave her pause given their course of study.

"It was his main focus as a psychology person. He was interested in what makes terrible people do terrible things," Johnson told CNN.

He knew mass shootings were "horrific," she said, "and he wanted to know what led a person to do those things."

Now that Betts has been identified as the gunman in a shooting in downtown Dayton that left nine dead and dozens injured, Johnson says she is trying to reconcile the person she knew with the scale of the tragedy.

Johnson shared her account of their relationship in a Medium post on Tuesday. "This is not an excuse for Connor Betts. This is just the Connor that I knew," read the first few lines of the post.

She told CNN that she knew he had guns, "but it's the Midwest so it's not real big news for people to have guns."

On their first date, Johnson said Betts showed her video of a mass shooting and gave her a play-by-play of what happened. She felt it wasn't abnormal for a psychology student to be fascinated by the "horrors of humans," she said.

Otherwise, "he was a perfect gentleman throughout our relationship," she said in the Medium post. "Our relationship mostly consisted of us going out drinking and talking about our mental illnesses and him telling me about world tragedies and me talking about TV shows."

She said he told her that he had bipolar disorder, and she told him that she had depression, generalized anxiety and attention deficit disorder.

"We bonded over depression humor, something that only people who have been in the throes of it really ever understand and find humorous. Joking about personal mental illnesses is one of the biggest coping tools in the mental health toolbelt," she wrote.

When he started talking about his "dark thoughts," such as wanting to hurt himself or others, Johnson said she understood them as a "symptom that we have to learn how to manage."

Most people might call such incidents "red flags," she said, but she did not see them that way.

Then, something happened in May that changed her perspective.

She said he asked her to drive past a house to leave a letter. When pressed, she said, he told her it was an ex-girlfriend's home, and the letter was threatening. When she questioned him about it, "he tried to downplay it as a joke," she wrote in Medium, "but I knew it wasn't, so I pushed further."

She said he then admitted that he sometimes had "uncontrollable urges to do things," such as burn down houses.

"That was the red flag and that's when I got out because I'm not sticking around for that," she told CNN.

She said she broke up with him via text message "because I didn't know how he'd react, so I wanted a safe distance."

She said she also texted his mother and told her what happened. She urged her "to keep an eye on him, because I cared about him and I wanted him to be safe," she told CNN.

Now she's trying to process what happened, she said.

"I didn't think he would go shoot strangers, especially his sister," she added.

She said she believes his mental health may have contributed to his actions as one factor in a storm of possibilities.

"This is a much more complicated issue than it is just mental illness or just gun control," she told CNN.

"To always pin murderers on mental illness -- there are millions of people with mental illnesses who don't go around shooting people. Myself included. We aren't dangerous, scary people. But it is a factor."

Johnson said that Betts believed, as she does, that people with mental illnesses shouldn't be allowed to own guns. "You don't know which people with mental illnesses will be the rare few like him, and who will be in the majority of the completely harmless," she said. "But putting a gun in their hand could spark thoughts that they would have otherwise never have thought of. It's not a risk that we should take, no matter how fun shooting one is."