Michelle Obama shades Trump after his derogatory tweets about Baltimore 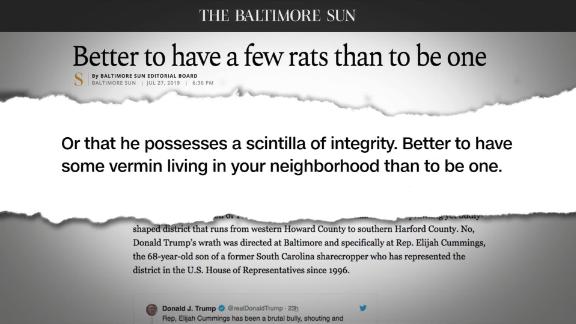 Michelle Obama is a master in the subtle art of shade.

The former first lady took to Twitter Saturday to honor a step-dancing team from Baltimore, just hours after President Donald Trump attacked a prominent African-American congressman and referred to his Baltimore district as a "disgusting, rat and rodent infested mess."

"On #NationalDanceDay, I'm shouting out the Lethal Ladies, a Baltimore STEP team who I saw perform back in 2017. I'm so proud of you all—and everyone who's dancing today!" Obama wrote.

Her tweet came as Baltimore leaders and residents are defending their city against the President's tirade, which targeted Democratic Rep. Elijah Cummings. The lawmaker represents Maryland's 7th Congressional District and recently lambasted conditions at the US-Mexico border.

Obama's tweet makes no mention of Trump. But if you watch the video clip, the message is clear.

"When someone is cruel or acts like a bully, you don't stoop to their level," one of the women can be heard saying in the video. "Our motto is ..."

Then the rest of the women on the team chant back a version of the phrase that the former first lady made famous: "When they go low, we go high. Raise our standards to the sky."

Michelle Obama made a similar veiled reference to the President last week after his racist attack on four progressive Democratic congresswoman of color.

Trump had implied in a series of tweets that the congresswomen weren't born in America and suggested "they go back and help fix the totally broken and crime infested places from which they came."

"What truly makes our country great is its diversity," Michelle Obama wrote. "I've seen that beauty in so many ways over the years. Whether we are born here or seek refuge here, there's a place for us all. We must remember it's not my America or your America. It's our America."

An NBA legend who was also a cultural icon: Kobe Bryant