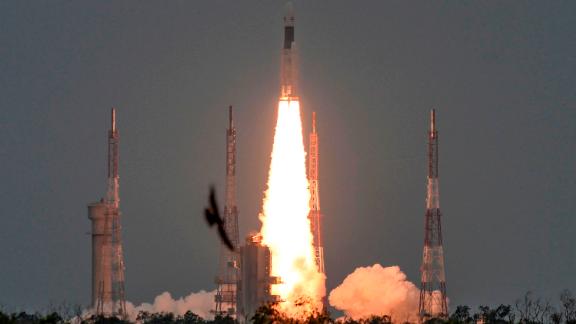 The country's latest lunar mission, Chandrayaan-2, which means "moon vehicle" in Sanskrit, took off from the Satish Dhawan Space Center at Sriharikota in Andhra Pradesh state.

India has successfully launched a mission to soft land a rover on the moon, in a landmark moment for a nation trying to become a space superpower.

The country's latest lunar mission, Chandrayaan-2, which means "moon vehicle" in Sanskrit, took off from the Satish Dhawan Space Center at Sriharikota in Andhra Pradesh state at 2:43 p.m., Monday local time (5:13 am ET).

The launch was originally scheduled for July 15, but was abruptly called off just 56 minutes before lift-off due to a "technical snag." India is now on the way to becoming the fourth country -- in addition to United States, China and the former Soviet Union -- to make a soft-landing on the lunar surface.

The Chandrayaan-2, which weighs 3.8 tons and carries 13 payloads, has three elements -- lunar orbiter, lander and rover, all developed by the Indian Space Research Organization (ISRO).

It will travel for two months, before positioning itself in a circular orbit 62 miles (100km) above the moon's surface. From there, the lander -- named Vikram after the pioneer of the Indian space program Vikram Sarabhai -- will separate from the main vessel and gently land on the moon's surface near its South Pole.

A robotic rover named Pragyan (meaning "wisdom") will then deploy and spend one lunar day, or 14 Earth days, collecting mineral and chemical samples from the moon's surface for remote scientific analysis.

Over the next year, the orbiter will map the lunar surface and study the outer atmosphere of the moon.

Kailasavadivoo Sivan, ISRO chairman, said in June that the last 15 minutes of the landing "are going to be the most terrifying moments for us."

Speaking at a press conference soon after the launch, Sivan said the "mammoth task" was possible thanks to the "hard work by Team ISRO."

"They worked continuously, forgot about their families, sacrificing their interests...in a non-stop mode, they worked to ensure that the snag was fixed properly."

"Special moments that will be etched in the annals of our glorious history! The launch of #Chandrayaan2 illustrates the prowess of our scientists and the determination of 130 crore Indians to scale new frontiers of science. Every Indian is immensely proud today!" he tweeted.

As well as coinciding with the 50th anniversary of the Apollo moon landing, the launch comes as other space agencies revisit the idea of sending humans to the moon and beyond -- NASA has touted a bold plan to return American astronauts to the moon by 2024.

This mission is significant for India -- the country wants to become a major space player and put Indian astronauts in space by 2022.

"India wants to show, especially since Prime Minister (Narendra) Modi came into office, that India is a major power, and that India has to be treated as a major Indo-Pacific power," said Rajeswari Pillai Rajagopalan, head of the nuclear and space policy initiative at the Observer Research Foundation.

Chandrayaan-1, India's maiden lunar mission, discovered water molecules on the surface of the moon. As part of that mission, an impact probe crashed into the moon's south polar region in a controlled landing.

India's attempted soft-landing is a far greater technical challenge than the controlled crash of Chandrayaan-1.

The two Chandrayaan missions are a precursor to Chandrayaan-3, which is scheduled to make a return mission to the moon in 2023-2024.

In 2014, India became the first Asian nation to reach the Red Planet, when it put the Mangalyaan probe into orbit around Mars. The Mars Orbiter Mission famously cost $74 million -- less than the $100 million than Hollywood spent making space thriller "Gravity."

In 2017, India launched a record 104 satellites in one mission while operating a low-cost budget. Earlier this year, Prime Minister Modi announced that India had shot down one of its own satellites, in what it claimed was an anti-satellite test, making it one of four countries to have achieved that feat.

Modi said that operation, called Mission Shakti -- which stands for "power" in Hindi -- would defend the country's interests in space. The Foreign Ministry said that India had "no intention of entering into an arms race in outer space."

The nation is also positioning itself as the launch pad for the world's commercial satellites -- it has launched 297 foreign satellites for 33 countries, according to the government's space agency.

ISRO chairman Sivan also announced in June that India was planning to set up an independent space station by 2030. Currently, the only space station available for expedition crews is the International Space Station (ISS) a joint project, which several countries participate in.

India's space agency has also proposed sending an orbiter to Venus by 2023.

"ISRO also has a capacity deficit, limited human and financial resources, so how will those be allocated between the space station and the astronauts program?" asked Rajagopalan. "Some of these things are driven towards nationalistic sentiments, pride and prestige but some are not going to be achievable."

There is competing competition for space-related power and prestige in Asia -- with China, India and Japan all outlining bold space exploration plans.

China, India's great regional rival for superpower status, is the most rapidly accelerating space power and, under President Xi Jinping's leadership, has invested billions in building up its space program.

In January, China made history by becoming the first nation to land a rover on the far side of the moon and a planned mission next year is due to land on the moon, collect samples and return to Earth.

Preliminary plans are also underway for a manned lunar mission in the 2030s. If successful, China would become only the second country, after the US, to put a citizen on the moon.

Beijing is also spending big on the Tiangong program, a precursor to a permanent space station it plans to finish construction on by around 2022.