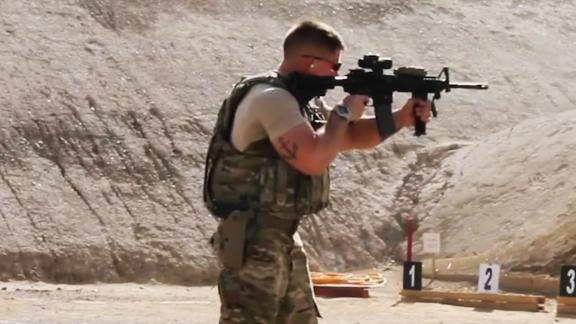 President Trump's ban on transgender Americans joining the military is now in effect. We meet a transgender military couple fighting to help transgender soldiers be afforded the same rights given to anyone willing and capable of serving their country.

The latest breach of America's civil-military tradition of political neutrality happened on a presidential visit to a US Navy ship docked in Japan. Some service members were wearing patches affixed to their uniforms featuring President Donald Trump's face, captioned with the words "Make Aircrew Great Again," a play on his "Make America Great Again" campaign slogan. Unit patches like this can be authorized by local command, and they can be irreverent and humorous.

But under DOD Directive 1344.10, Political Activities by Members of the Armed Forces, service members on active duty cannot "act in a manner that could reasonably give rise to the inference or appearance of official sponsorship, approval, or endorsement" of a political party or candidate, whether in or out of uniform.

What's happening today is several levels above the sorts of things specifically prohibited, like putting a political banner on your car or house. Regulation writers likely never imagined a day when presidential visits to military installations would become political rallies, or when service members would want to wear political paraphernalia on their uniforms.

The commander who authorized this might say, "C'mon it's funny, it's not political. We took a slogan and adapted it to our work in aviation. Trump is on the patch because it's his slogan, and he's the commander-in-chief. No one should take this as a literal political endorsement."

But that explanation isn't credible when troops wearing the patches are pleading with media members to help them get Trump autographs. A Navy spokesperson said: "Navy leadership is aware of the incident and reviewing to ensure the patch doesn't violate DoD policy or uniform regulations."

The military has been around this block before with the President. Air Force leaders allowed their people to wave actual "MAGA" campaign caps and hold up a Trump campaign flag, in uniform, when Trump visited Ramstein Air Base in Germany. Not a problem, leaders said, because "There is no rule against airmen bringing personal items to be signed by the president." They know better. Department of Defense regulations completely prohibit partisan political activity while in uniform, and it doesn't excuse the offense because you're using your own political paraphernalia to violate orders.

Troops should be excited and proud to meet the commander-in-chief. But it violates principles of military professionalism when the event turns into campaign spectacle. Imagine what it would feel like to be a military subordinate of these MAGA-hat-waving, MAGA-patch-wearing superiors. They are making quite clear what the "correct" political expression and allegiance of subordinates should be, even if they never directly say so. Their rank and their actions speak strongly enough.

Imagine if you're a military recruiter whose job it is to reach out across America and convince young people that the military is a good path for them, all the while the President is creating the impression that the military is a political institution that welcomes only those with partisan loyalty to Trump as an individual.

And that wasn't all. Trump used the occasion to demand a showing of the troops' political support for one of his uninformed but pet obsessions, whether the Navy should redesign ships to go back to steam-powered catapult systems rather than electric-powered. Trump took a poll of the crowd: "Do you like electric or steam?" On cue, voices went up yelling what they knew was the right, Trump-affirming answer: "Steam!" (Keep in mind that this particular ship doesn't even use a catapult, but let's ask anyway.) Apparently one poor soul responded "Electric," loud enough to be heard, and Trump zeroed right in:

"Who said "electric"? There's one guy back there. (Laughter.)"

Later, Trump again singled out the brave person who spoke up: "He works for the enemy. (Laughter.) He's all right. We'll — ooh, you might be in danger. I better be careful. (Laughter.)"

Is the President joking, half-joking, or not joking at all? It's not funny in the least to suggest that service members might be in danger from colleagues if they fail to provide uninformed answers on demand. But Trump has made clear since his first day in office that he believes members of the military are obligated to give him personal political support. At the Armed Services inaugural ball, Trump reminded service members exactly where they stood: "And I like you for a lot of reasons. Also, I like the fact that you all voted for me, right? You all voted for me."

Joshing? No. This is beyond-the-pale inappropriate behavior, politicizing the military for a president's personal benefit and vanity. Military professionalism depends on strict political neutrality. A president who openly fishes for votes and affirmation from people sworn to obey his orders will destroy that careful constitutional balance.

There are no mere "suggestions" within the military chain of command. This is why in 1976, near the beginning of the all-volunteer force, the Supreme Court held that the military had a constitutional responsibility to avoid "both the reality and the appearance of acting as a handmaiden for partisan political causes or candidates."

Breaches of the military's ethic of political neutrality are not only a constitutional problem. They also lead to bad policy. Steam or electric catapults? Just take a poll of the crowd — the president knows that the troops know which answer is the "right" one. Upend transgender service policy and put the careers of 14,700 service members at risk? Just send a few tweets and then commission a group of defense officials to write a report that backfills a justification, even if the reasons aren't credible to military experts.

The President isn't asking for military advice. He's asking for applause, for affirmation, for a pledge of personal loyalty on a decision he has already made in his own mind. Decisions made under those circumstances shouldn't be given the weight that military judgments are normally given. It's also terrifying that the president suggests, even if somehow in jest, that members of the military could retaliate against colleagues who provide candid, professional judgment instead of political allegiance.

It's no wonder that a recent news report quoted an Army NCO (non-commissioned officer) who praised a highly respected transgender colleague ("I wish I had more like her") but also asked not to be identified, "given the uncertain climate."

Breaches of the military ethic of political neutrality are not only unseemly, they are dangerous. They enable bullying and retaliation, they suppress candid advice, and they lead to careless policy. It's not just a patch.

Huntsville Police explain protocol for chases in the city

Huntsville community comes out to be a part of peaceful protest