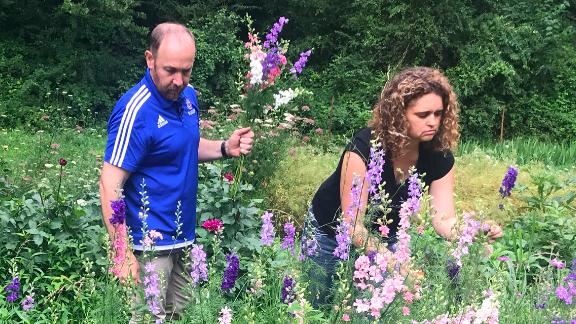 24 million Americans don't have broadband access, according to the Federal Communications Commission, and without reliable internet service, many rural communities are suffering. CNN's Miguel Marquez reports.

The fabric of America is crumbling. The American Society of Civil Engineers (ASCE) gives the nation's infrastructure a D+ grade -- that's the roads and bridges we drive on every day, the airports we use for business and vacation travel, and the schools where we send our children to learn. And newer networks critical to modern life, like broadband internet, haven't even reached many areas yet.

President Donald Trump declared at his inauguration, "We will build new roads, and highways, and bridges, and airports, and tunnels, and railways all across our wonderful nation." At least seven times, his White House has declared that the chosen theme of a week would be infrastructure, but each time the issue has become lost in other events, often generated by the President himself.

Money -- whether through taxes, tolls or private investment -- is the only way to fix the problem. The ASCE says $4.6 trillion is needed for improvements in the next decade. The Democrats said they and Trump had agreed on a $2 trillion price tag for an infrastructure plan -- which would only be part of a national solution that could also include state, local and private action -- but precious little has been achieved.

For Americans who have to use the aging, fragile structures every day, it is beyond time for investment and fixes.

Here's how some are being affected:

Sylvia Campos loves her 2011 red Nissan Cube, but she says the roads in Michigan are testing its limits. Her car makes a rattling sound after she hit a pothole on one of Detroit's highways recently. And it's not the first time.

Campos says she's also hit a pothole in the middle of a highway, where traffic means you can't safely swerve to avoid them. One time, she blew out her tire, she says.

"Every time I'm on the freeways, I'm scared," she tells CNN. "But you can't do nothing about it 'cause you've just got to take the hit. You can't go to the right and you can't get to the left because you're going to have an accident. It's terrible. They need to fix them."

Some places have decided to take action by themselves. Neighboring Ohio raised its gas tax to fund road fixes, the state's Department of Transportation says.

The nation's roads got a D in the latest ASCE report card. Michigan and New York were the worst, both getting a D-.

Mark Diatte, 13, goes to a school five times as old as he is. Many of the fixtures at Pennoyer School have not been replaced since they were new in 1954. There's been so much lead found in the water that several fountains are shut down and students help flush the system by turning on all faucets throughout the school for two minutes every week. That's not the only problem with water. When it rains, the roofs leak.

"Sometimes there's water coming through the ceiling in vast quantities," he says. "Usually there's a certain portion of the class that's like blocked off because of a leak or because of ripped off floors."

And he says the drastically different temperatures because of the old systems make it hard to learn.

"Imagine trying to learn algebra or reading a book while you're sweating or you're freezing to death."

Komarek School in Illinois is caught in a Catch-22. Right now the school has permission to have students because its age -- built in 1936, with ventilation systems from the 40s or 50s -- means it is exempt from some modern safety codes. The thermostat in the school hasn't even been manufactured since 1958.

But if superintendent Brian Ganan wants to upgrade one system, he may be required to fix many others, which would be unaffordable.

"You won't see sprinklers here, again that's because we are grandfathered in. Doors are not fire-rated, again because they are grandfathered in," he says. "Part of the reason is the cost that it would take to repair all that. But it doesn't make it safe for kids."

Even when things are working, it doesn't mean they're good.

"Our kindergartners can't sit on the floor because the boiler room is underneath it. The floor gets to be 95 degrees," he says.

The nation's schools got a D+ in the latest ASCE report card.

Amanda Pritchard runs a flower farm on the outskirts of Cleveland, Tennessee, about 30 miles from Chattanooga. She attracts customers online, but she often cannot see her own website. While she has municipal utilities for water, electricity, and so on, there is no internet service.

The cellphone service is spotty, so even uploading something to social media can take 15 or 20 minutes, and the dream of uploading videos to show customers what's available or grow interest in the farm seems unattainable right now.

"We sometimes have to go into town with better internet service to even upload information on our website to reach our clients," she says.

It also impacts Amanda's husband, Bob, and their three children, who sometimes end up doing their homework in the car in a parking lot in town to be able to get online.

And when they ask their provider, Bob says they get the reply, "We're hopeful that someday you'll be able to get internet." But there is no date.

24 million Americans don't have broadband access, according to the Federal Communications Commission.

"LAX, and other airports across the country, have infrastructure that has (needed updating) for the last 10, 20 years and we're now in a position where we have to do them because our airports are failing," she said.

"If the facilities have people waiting in long queues and lines because, you know, we don't have sufficient facilities for them to be processed or we haven't been able to invest in the technology that allows that experience to be faster, that does a disservice to all of us."

Flint said airport executives want the federal cap on the Passenger Facility Charge to be raised from $4.50 -- a rate last in changed in 2001 -- to $8.50 per flight.

"Frankly, I don't think passengers would even necessarily know they were paying it," she said.

Karen Warrick of Tehachapi, California, says long waits in lines at the airport are the most frustrating part as a flyer. If that could be fixed by paying a little more, she'd do it.

"I am never crazy about having to pay a lot more, but I think as long as they cap it again after this increase, I think it will be reasonable to help with infrastructure," she says. "But I think they should cap it so they don't continue to spend more and more, and charge us more and more. We are already paying quite a bit."

The nation's airports got a D in the latest ASCE report card.