Mitch McConnell is worse than the Grim Reaper 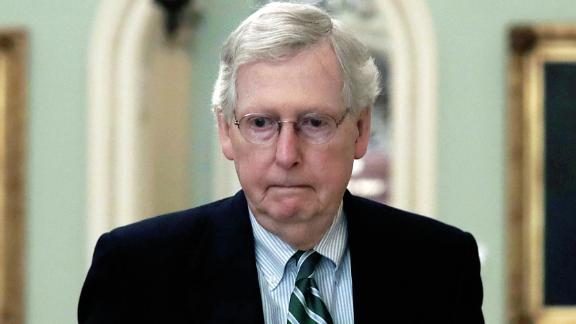 Senate Majority Leader Mitch McConnell calls himself the "Grim Reaper," vowing to kill whichever bill that he labels as socialist legislation, including a bill that pushes for election security. CNN's Sunlen Serfaty reports.

To me, in political terms, McConnell is actually far worse than the Grim Reaper. The Grim Reaper only comes once in our lifetimes -- at the moment of death. In contrast, McConnell has been killing legislation for years. Add to that, McConnell has now gone beyond killing bills to helping embolden Donald Trump's worst instincts (but more on that later).

So, what led to this moment of bipartisanship? On Thursday, Pelosi tweeted that McConnell has "taken to calling himself 'the Grim Reaper.'" She attached to that tweet an image dubbed "McConnell's graveyard," filled with mini tombstones that bore the names of bills the House recently passed, but that McConnell has not allowed to come up for a vote in the Senate. These include the reauthorization of the Violence Against Women Act, a gun violence prevention bill that would extend background checks to all gun sales, and the Equality Act, which would extend civil rights protections to the LGBT community.

To make matter worse, McConnell has even inexcusably recently blocked bipartisan measures to protect our 2020 election from interference, such as a proposal that would improve cyber information-sharing initiatives between federal intelligence services and state election officials. (According to the New York Times, McConnell's reasoning for this is that he's ideologically opposed to federal regulation of elections.)

Come Thursday night, there was McConnell on Fox News with Laura Ingraham -- where he was asked about Pelosi's tweet. A gleeful McConnell responded, "For the first time in my memory, I agree with Nancy Pelosi," declaring, "I am indeed the 'Grim Reaper' ... when it comes to the socialist agenda that they have been ginning up over in the House." His comments are confusing, since I'm not sure what "socialism" has to do with protecting women from violence, reducing gun violence or ending discrimination against the LGBT community.

However, McConnell's "Grim Reaper" status is nothing new. We saw it emerge in October 2010, when he boasted of his intention to kill President Barack Obama's re-election prospects -- with his proclamation before a conservative audience, "The single most important thing we want to achieve is for President Obama to be a one-term president."

Thankfully, McConnell didn't succeed at that goal, but since becoming Senate Majority Leader in 2011, he did all he could to prevent then-President Obama from legislative successes. As Politico reported, McConnell told congressional Republicans when he ascended to his role as Senate leader that, "if Americans thought DC politicians were working together, they would credit the President, and if they thought DC seemed as ugly and messy as always, they would blame the President."

One example included a criminal reform bill championed by Obama in 2016 that had broad bipartisan support and reportedly would have passed easily. Yet McConnell prevented a vote in the Senate, reportedly for purely political reasons. Namely, according to the New York Times, he didn't want to hurt Trump's 2016 campaign claim that crime was surging -- and passing a criminal justice reform bill could've been seen as undermining that assertion.

But beyond killing legislation, McConnell infamously buried Obama's nomination of Judge Merrick Garland to fill a vacancy on the Supreme Court after the February 2016 death of Justice Antonin Scalia. At the time, McConnell justified the action by claiming that it was a presidential election year. Yet the famed "Grim Reaper" apparently has no problem with giving life to hypocrisy, as he recently declared that if a Supreme Court vacancy occurred in 2020, he would fill it.

And worse -- if that's even possible -- this week McConnell refused to criticize Trump for openly saying that, come the 2020 election, he would listen to "dirt" from a foreign government on his political opponent in order to help his campaign. Even Fox News' Judge Andrew Napolitano explained that if Trump did that, it would constitute a felony. (On Friday morning, Trump took to Fox News in an apparent effort to do damage control by saying he would contact the FBI if foreign government's offered him "dirt" -- but only after reviewing it first to see it was "bad.")

Yet when McConnell was asked by Laura Ingraham on Thursday night, "Do you think the President made a mistake in the way he answered that question...?" McConnell dismxissed the issue, saying Trump "gets picked at every day about every different aspect of it ... but the fundamental point is they are trying to keep the 2016 election alive." McConnell is no longer just the "Grim Reaper," but also the generous supporter of the President's most dangerous ideas.

There's no way to stop the actual "Grim Reaper." But, with McConnell, there's one way to retire him. He is up for re-election in November 2020. And before you dismiss the notion that McConnell could lose, keep in mind that a recent poll from McConnell's home state of Kentucky shows him with about a 33% favorable rating, while over 50% hold an unfavorable view.

The people of Kentucky may just have had their fill of McConnell, who appears to take joy in killing legislation that will help our nation. Kentucky voters could retaliate and act as the "Grim Reaper" -- bringing McConnell's political career to an end.