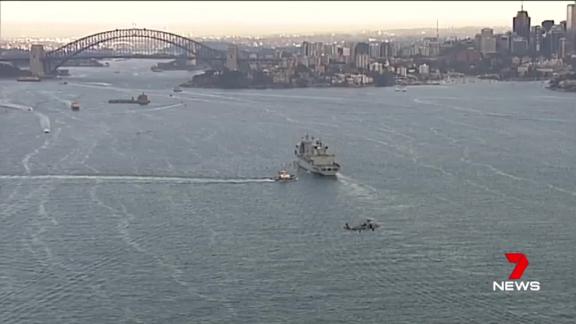 Three Chinese warships have pulled into Australia's Sydney Harbor for a four-day stopover.

A People's Liberation Army supply vessel, a frigate and an amphibious vessel docked at the Garden Island naval base on Monday morning, according to CNN affiliate 7 News.

Although the visit was not publicly announced, Australian Prime Minister Scott Morrison said plans for the stopover had been in place for "some time."

"It may have been a surprise to others but it certainly wasn't a surprise to the government," Morrison told reporters in the Solomon Islands, according to CNN affiliate SBS.

"Australian naval vessels have visited China. This was a program of a reciprocal visit. That is a further demonstration of the relationship that we have."

The vessels -- which have about 700 sailors on board -- were previously involved in anti-piracy operations off the African coast, 7 News reported.

Chinese warships have sailed in Sydney Harbor before, including in 2013 and in 2010.

The media is often invited in for an official welcome. But this time no cameras were allowed inside.

Australia's Department of Defence did not reply to CNN's request for comment.