'SNL' star Leslie Jones tears into Alabama abortion law: 'You can't tell me what to do with my body' 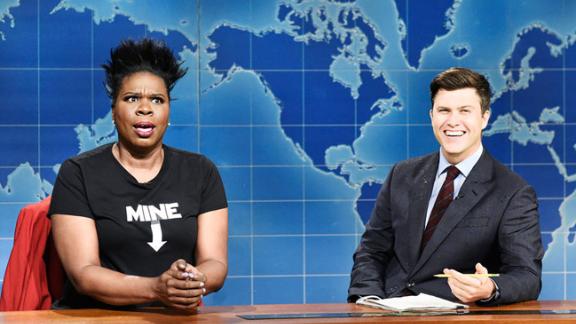 Alabama's new anti-abortion law drew the fire of "Saturday Night Live" star Leslie Jones, who proclaimed, "You can't tell me what to do with my body" on the show.

Jones opened her segment on "Weekend Update" wearing a "Handmaid's Tale" costume, which she quickly removed to reveal a T-shirt. It had the word "MINE" with an arrow pointing down.

What followed was both comical and serious.

"The next thing you know, I'm at Starbucks and they won't take my credit card because I'm a woman, instead of the regular reason, which is I don't have no money on it," she said.

Jones showed a photo of the male legislators in Alabama who voted for the near-total ban on the procedure in an effort to overturn Roe v. Wade, the US Supreme Court ruling that allowed abortion nationwide in 1973.

"This look like the mugshots of everyone arrested at a massage parlor," Jones said. "And if any of them had lips, I would tell them to kiss my entire a**. You can't control women because -- I don't know if y'all heard -- but women are the same as humans.

"When women have a choice, women have freedom," Jones said about the wave of states passing measures to severely restrict abortion rights. "This really is a war on women."

She concluded by shouting "Dracarys!" the command a "Game of Thrones" character gives to a dragon to unleash fire on her enemies.

Jones is a fan of the long-running show, which concludes its eight-season run Sunday on HBO.