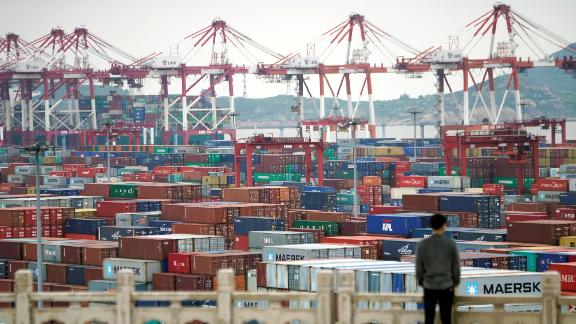 China has announced it will raise tariffs on $60 billion worth of imported goods from the United States.

President Donald Trump is raising the stakes in the face-off against China by imposing tariffs and vowing the US will not yield to Beijing when it comes to trade. Now China is retaliating with sanctions of its own.

On another front, however, Beijing has already won. Not long ago, human rights stood at the center of US-China relations. Today, with China committing some of the most serious human rights violations anywhere on Earth, the topic has been relegated to the back burner.

To hear Trump talk about it ... well, you don't, because Trump hasn't said much.

China's repression has reached new depths in recent years, with the worst abuses now occurring in Xinjiang, a majority-Muslim territory deep in the Northwest of the country, bordering Mongolia.

There, Beijing has set up a network of detention centers imprisoning by some estimates up to several million ethnic Uyghurs, Kazakhs, Kyrgyzs, and other predominantly Muslim ethnic minorities. China claims the facilities are nothing but voluntary vocational training centers aimed at eliminating Islamic extremism. But the barbed wire and guard towers shout prison camp, not training center. Former inmates told CNN that they were tortured during sessions of political indoctrination.

What Muslims are facing in China

The exact number in detention is unclear -- the US Assistant Secretary of Defense Randall Shriver, who called the facilities "concentration camps," said there may be as many as three million. The identities of those inside also remain unclear, which adds to the anguish of relatives in the province and those in exile, left wondering about the fate of their loved ones who have mysteriously disappeared without a trace.

Beyond the detention centers, Muslims in Xinjiang live under constant surveillance, with high-tech facial recognition software that identifies Uyghurs from the Han, China's main ethnic group.

Xi Jinping, the country's most powerful leader in decades, is looking to tighten the regime's domestic political control and expand its global influence. The detention camps are believed to be part of a wider campaign to project power and ultimately confront the US through both military and economic means, according to the Pentagon. At the very least, they aim to fortify the regime's already tight grip on China's vast territory.

In the past, Beijing's construction of a gulag, or a network of concentration camps, would have figured prominently in its relations with the US and other countries. Now, it is a nettlesome afterthought in a world where China has become the world's second largest economy.

Despite Trump's reticence on the issue, the US government is well aware of what is happening in Xinjiang. Secretary of State Mike Pompeo says the US has considered imposing economic sanctions related to the campaign against Uyghurs (the Magnitsky Law allows the government to sanction foreign officials implicated in human rights abuses). But the Trump administration has avoided raising the issue during trade talks, and so far, no sanctions have materialized. Instead, President Trump has praised Xi's vast expansion of power and reserved his tough talk for matters of trade.

But it's not only the Trump administration that has surrendered to China on human rights. Washington has been gradually giving up the fight for many years.

Beijing and Washington started growing close after Nixon's visit in 1972. The warming ties came to a sudden freeze, however, 30 years ago when Beijing sent tanks to Tiananmen Square, crushing a pro-democracy uprising. The images of tanks deliberately running over students who had built their own version of the Statue of Liberty shocked the world.

Washington immediately imposed tough economic sanctions and suspended high-level talks, vowing relations would not normalize until China improved its human rights record. But China never did. Instead, it became a fierce advocate for every country's right to handle its own domestic affairs without international meddling, effectively supporting human rights abusers everywhere.

In 1997, ahead of a controversial trip to Beijing, President Bill Clinton argued that"constructive engagement" would prove more effective than sanctions in persuading Beijing to change its ways. Clinton normalized trade relations with China and supported its accession into the World Trade Organization with the hopes that economic freedom would not only open markets to US firms, but also lead to the spread of democracy.

During this time, the US still spoke out against China's human rights violations when it came to the crackdown on Tibetans and the continued imprisonment and harassment of democracy advocates.

As China's economy grew, Beijing maintained that the economic progress that pulled hundreds of millions out of poverty outweighed the human rights cost of repressive measures that kept progress on track. In fact, repression allowed the Chinese Communist Party to tighten its grip on power even as it left behind communism in favor of a market economy.

Economic progress also allowed China to wield greater international influence. As it became an economic powerhouse, the US and the West began losing the battle for human rights.

By 2010, China surpassed Japan as the world's second largest economy, inching closer to the US, and becoming America's largest creditor. Ever since, the US has struggled to maintain the perennial balancing act between democratic ideals and economic interests.

When the Dalai Lama came to the US in 2010, President Barack Obama met with him in the White House, despite Chinese objections. But the Tibetan spiritual leader was shuffled out through a back door, dodging a pile of garbage bags. The administration was trying to downplay the visit for fear of angering Beijing. Regardless, the Chinese were furious.

Tibetans and their supporters, on the other hand, complained that Obama had become too timid on Tibet in an effort to appease Beijing. While Obama was defying Beijing with the meeting, he was skimping on honoring the man who symbolizes Tibet's fading dreams of independence.

Since his election in 2016, Trump has not met with the Dalai Lama or had much of anything to say about human rights. US strategists, meanwhile, worry more about China's massive military buildup, the bullying of its neighbors, and its aggressive international development program known as the Belt and Road Initiative.

Human rights have fallen far down the agenda.

In fact, the regime's abuse of human rights is one of its Achilles heels. The regime maintains control, but the Chinese, along with international onlookers, know Beijing falls short on freedom. Human rights violations are a reason for shame. That's why Beijing denies them.

If Trump really wants to be tough on China, he could pressure Beijing by pointing to those abuses. Trump may not care about the rights of Uyghurs in Xinjiang, but China knows what's going on there, and it knows it deeply tarnishes the regime on the world stage.

Reviving the topic could help ease the misery in Xinjiang, with the added benefit of giving Trump more leverage on trade.

One man hospitalized after officer-involved shooting in Gurley