The world's most extreme odysseys 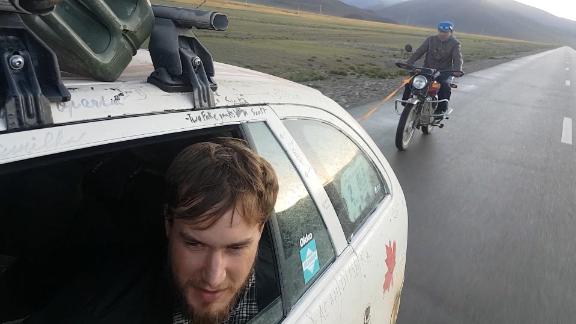 Mongol Rally participants race across Central Europe and Asia in cars with one-liter engines -- or on scooters or motorcycles. No set route. No assistance.

Who in the world would voluntarily do something like this?

Putter across a thousand miles of unpaved, diesel-sucking, middle-of-nowhere Australian desert along an old stock route built exclusively for the most hardened cows more than a century ago?

Or race from Prague to Siberia in a car you could strap on your back -- even if it's sort of for charity?

Who would opt to plod across the entire length of Canada? And then its height too -- just for good, 15,000-mile measure?

Why jog every day for an entire summer from dawn until midnight in Queens, New York -- or drop close to $100K on an eight-month cruise -- or strap into a premium economy seat for over 18 hours just to escape Newark International?

These are all-important, soul-searching questions, none of which will be answered here.

All we can do is put in our votes for 10 of the world's most extreme journeys, with the usual disclaimer: No one's forcing you.

What: Auto adventure race
Where: Czech Republic to Siberia
Whoa: In a puny, dirt-cheap car that's beyond salvation

Any competition dubbing itself "the greatest motor adventure on the planet" has to back up the claim with some hard figures.

The Mongol Rally -- a charity-driven, nearly rule-free car race across Central Europe and Asia -- provides two such hard figures for its would-be competitors to consider, both of them sufficiently excruciating.

10,000. That's how many miles of relentless Eurasian back roads you'll have to cover from the starting gate near Prague to the finish line in Ulan-Ude, Siberia.

One. That's the maximum sized liter engine eligible for the race -- 1.2, if you're a softy. No set route. No assistance. Otherwise, what's the fun?

£1,000 ante to charity. The race launches in late July and ends sometime in August or September.

"Your chances of being seriously injured or dying as a result of taking part are high," note the UK-based event organizers, The Adventurists -- the same folks behind the Rickshaw Run (trans-India rickshaw race), the Ice Run (1,000-mile motorcycle race across a giant frozen Russian lake in the dead of winter) and the Kraken Cup (Tanzanian fishing boat race in the Indian Ocean).

Flanked by three vast deserts in one of the most remote lizardscapes of Western Australia, the Canning Stock Route was built in 1910 to rectify a regional beef monopoly which likely escaped most history books.

Today, the sirloin train is a thing of the past on the world's longest historic cattle trail, stretching for over a thousand miles between the tiny towns of Halls Creek and Wiluna.

So who dares tread here now?

Sparse convoys of four-wheel-drive adventurers trying their luck along an unremitting corrugated track of sand, rock and spinifex grass, furnished with spectacular antipodean desert imagery, scattered wells and a lone Aboriginal community somewhere in the middle for re-fueling.

Minimum time to complete the drive is ten days. But that's seriously pushing it.

"Our average speed is 22 km/h," logs a recent thru-motorist along the trail. "That's why it took us 21 days to complete the Canning Stock Route."

Spanning nearly 15,000 miles across the length and height of Canada, The Great Trail was officially connected across Canada in 2017 after 25 years in the making -- and is now convincingly branded as the world's longest network of recreational trails.

Less a single path than a linked series of 400 regional land and water routes strung across all 10 Canadian provinces and three territories, the trail runs coast-to-coast along southern Canada from Newfoundland to Vancouver Island before making a giant loop into the Arctic.

At present, only a single individual has managed to make it across the entire country along The Great Trail, and is now presumably plodding north.

Attention lido decksters who've outgrown the mere seven, 14 or 28 days it takes to not-quite-leisurely-enough bob through the usual checklist of Caribbean or Mediterranean ports.

Viking's latest chart buster -- the Ultimate World Cruise -- will be ushering mega-cruising into an entirely new wheelhouse this summer.

Setting off from London on August 31,2019, the eight-month luxury cruise will treat passengers (residents, really) to 53 countries, 111 cities and ports, 111 guided tours, and incalculable buffets before returning to London the following May, 2020.

Sadly, time will not permit Antarctica.

What: Traditional backcountry survival training
Where: Southern Utah
Whoa: 28 Days in the desert without a pack

How well could you handle living in the Utah backcountry for a week or longer with just a blanket, poncho and knife?

For the last 50 years, Boulder Outdoor Survival School (BOSS) -- a pioneer in traditional living skills training -- has been helping regular folks find out.

No stoves. No backpacks. No GPS. The company's 7-day and 14-day wilderness training programs in southern Utah canyon country are no joke.

"The mental, physical, and emotional challenges may leave you 10 to 30 pounds lighter at the end of the course," states BOSS. "But the wilderness competency and the greater sense of self that you gain are priceless."

Starting in Moscow, the Trans-Siberian Express clickety-clacks through eight time zones, past 87 Russian cities and towns, across over 3,900 bridges, and features enough Siberian taiga to carpet Jupiter on a 6,000-mile, weeklong journey to Vladivostok.

Train passengers can save time by opting for two marginally shorter trans-Siberian options -- the Trans-Manchurian and Trans-Mongolian Expresses -- which follow the same tracks before branching off to Beijing along different routes.

But if you're on any of these iron horses, you're likely not in any huge gallop to get somewhere.

Extend the journey by exploring a checklist of stops along the way, including St. Petersburg, historic Yaroslavl, Irkutsk ("the Paris of Siberia") and the expansive shores of Lake Baikal -- the largest, deepest freshwater lake on the planet.

What: Off-road cycling trail
Where: Canada and the US
Whoa: Approximately 2,700 miles

For a sanity-sized sampler of the route, the Adventure Cycling Association (which launched the trail two decades ago) will be hosting several 10- to 12-day guided tours along select spots in honor of the route's 20th anniversary -- ranging from British Columbia's Wigwam River Valley to Wyoming's high plains to a skyscraping spin through the Colorado Rockies.

In its 23rd year, the world's longest certified footrace, according to its organizers, happens on the shortest imaginable route -- circling one city block in Queens over and over (and over and over) again over an entire summer.

Conceived in 1996 by late Indian spiritual leader Sri Chinmoy, a practitioner of extreme physical feats as a path to spiritual enlightenment and transcendence, the race has also been called a "pilgrimage" by its participants.

Runners must average about 60 miles and 100 laps a day to log the 3,100 miles within the 52-day time limit -- often starting at 6 a.m., eating and drinking while on the move, and stopping at midnight for some brief, uncharacteristically sedentary sleep.

Western Bolivia's Yungas Road -- a.k.a. El Camino de la Muerte ("Death Road") -- which serpentines between La Paz and the picturesque hill town of Coroico (dropping over 10,000 feet along the way) was tapped as the "world's most dangerous road" by the Inter-American Development Bank -- back when bad years claimed more than 200 lives along the route.

Built by Paraguayan POWs back in the 1930s and now updated with a modernized bypass that re-routes trucks and buses away from its most perilous stretches, the old road remains a thrill roll for mountain bikers and off-road motorcyclists edging along a gravelly single-lane flanked between fog-strewn 2,000-foot drop-offs and hundreds of tiny crosses memorializing tragedies past and recent enough.

Remember when that measly 14 ½-hour commuter from JFK to Johannesburg was the world's longest non-stop flight?

When will you get your coronavirus stimulus cash, and how?