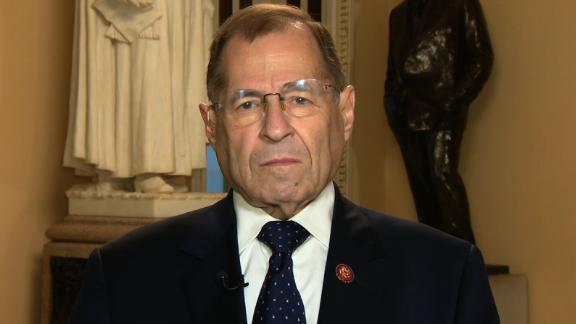 Rep. Jerry Nadler (D-NY), the chairman of the House Judiciary Committee, said that the US is in a "constitutional crisis" over a showdown about the release of a full version of special counsel Robert Mueller's report.

President Donald Trump has declared that executive privilege should keep private the redacted parts of the Mueller report, and a congressional committee is moving to vote on whether to charge his attorney general with contempt.

So clearly House Judiciary Committee Chairman Jerry Nadler was right when he said on CNN Wednesday, "The phrase constitutional crisis has been overused, but certainly it's a constitutional crisis ..." This is not the first time that we have heard such warnings, but now this crisis is very real. If the Defense Department were applying its crisis scale to our political situation, it might well call it Defcon 1.

By definition, a constitutional crisis is a moment when the mechanisms of government are not working to resolve a fundamental problem. The nation has been through a number of these moments, such as the secession of southern states which resulted in the Civil War, and President Richard Nixon's resistance to turning over White House recordings in 1974.

House Democrats have ramped up their investigations into multiple elements of this presidency, ranging from the evidence presented in the Mueller report, which pointed to obstruction of justice, to efforts to see his tax returns. In a bold rebuff, the President is saying no to almost everything. He is resisting subpoenas, he is trying to prevent people from testifying and he is asserting executive privilege. As House Democrats attempt to flex their oversight muscle, the President is just saying no.

The crisis is a result of several factors. Most important, Trump has an extraordinarily grandiose sense of what his power is about. He does not feel constrained by the norms and traditions that have held other presidents in check. He has now brought on board an attorney general, William Barr, who for years has been a proponent of a muscular executive branch in which the President has few formal limits. The combination in the Oval Office has produced explosive results.

What's more, when Trump takes evasive steps he does so with immense institutional support. The powers of the presidency have been rebuilt since the mid-1970s, when Congress tried to reassert itself in response to Vietnam and Watergate. Over the decades, presidents in both parties have gradually strengthened the executive branch. The limits of what Congress can do in its efforts to oversee an aggressive president have become painfully apparent. Even the formal mechanisms available to Congress, such as contempt citations, are cumbersome and could take years to resolve.

Then there is a Republican Party that stands by the President no matter what he does. Even as very prominent conservatives, such as Kellyanne Conway's husband -- and a Trump antagonist -- George Conway, have called for impeachment proceedings to begin, congressional Republicans are standing firm.

The most important stonewall in Washington right now is Senate Majority Leader Mitch McConnell who took it upon himself to say "case closed" after the Mueller report and has made it very clear he and the Republicans will not support any kind of substantive investigation or impeachment hearings. This cold partisan reality has made it extremely difficult for Democrats to muster the power needed to take on these battles. With Republicans saying no to oversight, and Republicans in control of the Senate, the President finds himself with strong backing to resist Democratic demands.

And finally there is a Democratic Party, which until now has exhibited considerable political fear about flexing its institutional muscle. The concern that does exist in the Democratic Caucus about the way that the president is employing his power has been overwhelmed by political worries of triggering the kind of backlash that Republicans faced in the 1990s, or of undercutting the odds for Democrats to win back the White House in 2020. Democrats clearly have reason to act cautiously and slowly before unleashing such a monumental process as impeachment, but there is also a point where events might force their hand and the obligations of holding power could outweigh all other fears.

Numerous party leaders have continued to throw cold water on calls to start impeachment proceedings and they continue to show an abiding faith that the normal rules of engagement will eventually produce results.

But the system is not working. The President continues to dare the country to do something about the way that he is using his power and right now nothing immediately effective is happening in response. The only way out of the crisis will be for one of the branches of government to intervene -- as the Supreme Court did with Richard Nixon -- or for Trump to fold. The only other way out will be an election in 2020 that finally brings a new kind of leader to Washington.

Black ice causing issues for drivers along Highway 231 in Huntsville