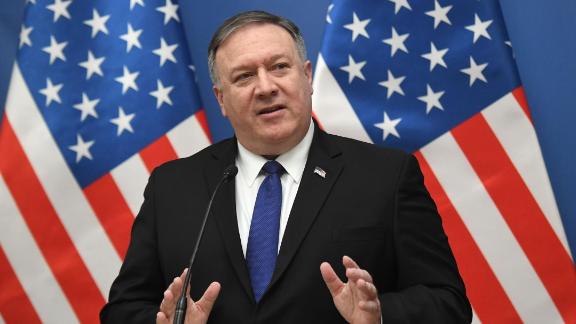 North Korea has issued a damning criticism of US Secretary of State Mike Pompeo, calling for him to be replaced in any future US-North Korea talks by someone who is "more careful and mature," North Korean state news agency KCNA reports.

Where can you find the world's tallest indoor waterfall? An airport in Singapore, of course. Here's what else you need to know to Get Up to Speed and Out the Door. (You can also get "5 Things You Need to Know Today" delivered to your inbox daily. Sign up here.)

Welcome to the Mueller report pre-game show, as Washington and the world await the release this morning of the redacted version of special counsel Robert Mueller's findings in the Russia investigation. The report is set to be sent to Congress after 11 a.m. ET. But Attorney General William Barr will hold a news conference to talk about it at 9:30 a.m. ET. That angers Democrats, who accuse Barr of rying to pre-spin whatever comes out. The White House knows a little bit more about the report than the rest of us right now. The New York Times reported that Justice Department officials have talked repeatedly with the White House about what's in Mueller's report. Other media outlets say what was shared with the White House was broad and non-specific. Here's a reader's guide to the report that the world has waited two years to read.

North Korea conducted a test of some type of "tactical" weapon. The country's state media said leader Kim Jong Un inspected and directed the test of the unspecified weapon. But it doesn't seem like this will spark a return of the "fire and fury" days with the US, at least not yet. It doesn't seem to have been a test of a nuclear weapon, and Defense Department officials said no missile launch was detected. Tactical weapons are generally designed for the battlefield and are typically not long-range armaments. This comes as the US is trying to kick-start nuclear talks with the North after the failed summit this year between Trump and Kim. But Pyongyang would rather those talks resume without US Secretary of State Mike Pompeo. The North wants someone else "who is more careful and mature in communicating with us."

The woman whose threats forced the closing of schools in and around Denver is dead. Now, police are looking for clues at a website believed to be linked to her. Sol Pais was found dead of an apparent self-inflicted shotgun blast yesterday at a recreation area outside Denver. Pais, a Florida high school student, was "infatuated" with the Columbine High School massacre, the FBI said. The website authorities are looking at had scanned and handwritten journal entries from someone who signed them, Sol Pais. She was one of many people who have an obsession with the 1999 mass shooting, which left 13 people dead.

A man tried to enter St. Patrick's Cathedral in New York last night with gallons of gas, lighter fluid and lighters. A security guard stopped the unidentified 37-year-old man, and he was later taken into custody. Officials described the New Jersey man as emotionally disturbed. This incident comes just days after the fire that gutted Notre Dame Cathedral in Paris. More than $700 million in donations has been pledged so far for Notre Dame's restoration. And that's inspired people to donate almost $2 million to help rebuild the three black churches that were recently burned in Louisiana.

Stop us if you've heard this one: Facebook is in trouble, again. This time, the social media giant admitted to collecting up to 1.5 million users' email contacts without their permission. Facebook says it's all a big mistake. The email contact lists were "unintentionally" uploaded to Facebook after a design change almost two years ago. The lists are being deleted. It's just the latest black eye for Facebook on privacy. Facebook revealed last spring that data analysis firm Cambridge Analytica accessed and improperly stored user data. Then in the fall, Facebook suffered the biggest security breach in its history, with hackers gaining access to the information of at least 50 million users.

Message in a bottle

We may have already had a visitor from another solar system -- a small meteor that dropped into the Pacific five years ago. But what did it bring?

Carl's Jr. is testing out a new cannabis burger in Denver that has sauce infused with cannabidiol. The test will be on a single day -- April 20.

Samsung's groundbreaking Galaxy Fold phones aren't even out yet, but some early users say the foldable smartphones break after a couple of days' use.

UK diver Josh Bratchley helped save that Thai soccer team from a flooded cave last year. This week, he needed saving after getting trapped in a US cave.

"You can create your own lanes, just as I am."

Kim Kardashian West, responding to critics who've told her to stay in her "lane" after the model and reality TV star announced she's studying to become a lawyer

The number of views in 24 hours of the new music video by K-pop group BTS. That sets a new YouTube record.

If you're happy and you know it, say meow. (Click to view.)